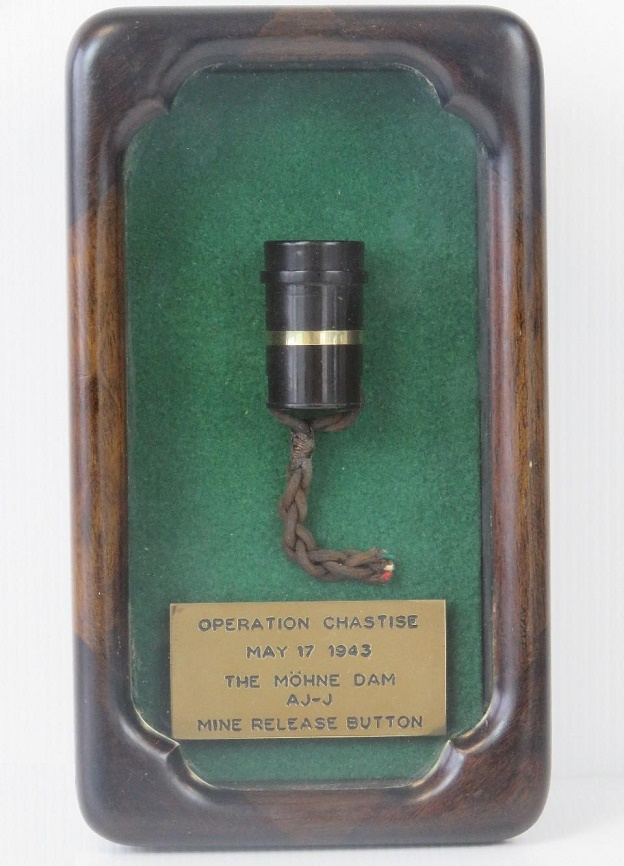 A button which released the bombs during the historic WWII ‘Dambusters’ raid has sold for almost £40,000 at auction.

The button is believed to be the only surviving example from the famous raid, in which the British RAF 617 Squadron attacked German dams using specially-developed ‘bouncing bombs’.

It had been described as “an incredibly rare and important British wartime artefact”, and sold at JP Humbert Auctioneers in Northamptonshire.

The button was used aboard Lancaster bomber ED 906 AJ-J, known as ‘J Johnny’, the fifth aircraft to make a bomb run during the attack on the Möhne Dam.

The bombs dropped by the first three planes failed to hit the target, and the fourth caused only a small breach.

J Johnny, piloted by Squadron Leader D.J.H Maltby, was the first plane to score a direct hit on the damn and cause a large breach before returning home safely to England.

The Bakelite button which set the bouncing bombs away was pressed by John Fort, one of the most proficient bomb aimers in 617 Squadron.

Back in 2015, the wooden triangular bombsight used to devastating effect by Fort also sold at JP Hubbert Auctioneers, fetching a final price of £41,000.

Following Operation Chastise, both the mine release button and the bombsight had been given by pilot David Maltby to his father Ettrick Maltby, Headmaster and owner of the Hydneye House Preparatory School.

The items had been displayed in the school’s museum for many years, before it closed down in the 1970s, and had later passed into the hands of a former pupil who collected aviation memorabilia.

Fort, Maltby and the rest of the crew were killed just a few months after the Dambusters raid in September 1943, during a low-level raid on Dortmund-Ems Canal, when their plane crashed into the North Sea.

The auction on July 1 also featured several other rare items of Dambusters memorabilia.

These included a set of large glass marbles used by inventor Barnes Wallis during the development of the bouncing bomb, which sold for £18,500 ($24,000) and an altimeter from the cockpit of bomber ED932 AJ-G, piloted by Squadron Leader Guy Gibson, which sold for £6,200 ($8,000).

“We anticipated global interest in these evocative and iconic pieces of 20th Century British history and I am pleased to report that interest exceeded expectation,” said auctioneer Jonathan Humbert after the sale.