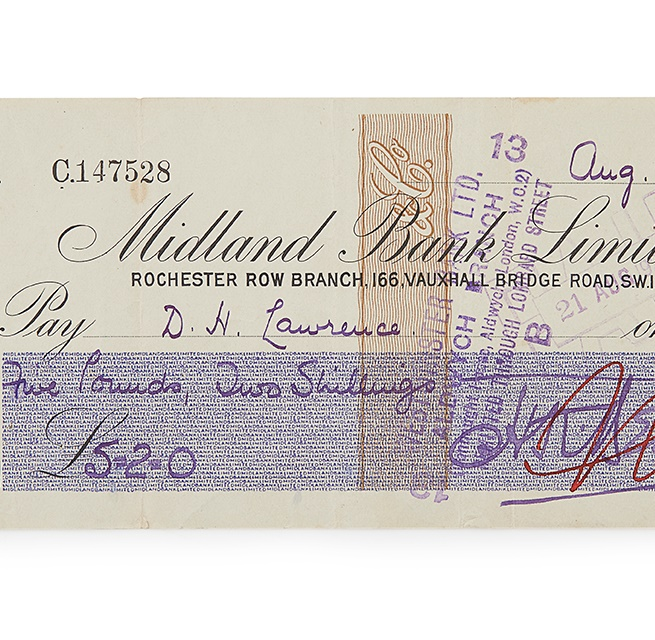 A cheque sent to author D.H Lawrence to buy copies of his banned book Lady Chatterley’s Lover is up for auction at Lyon & Turnbull.
The book was banned in the U.K for more than 30 years due to its profane language and depictions of sex – although copies were still available, if you knew who to ask.

The cheque on offer – made out for five pounds and two shillings, and bearing Lawrence’s signature on the reverse – shows that the author himself was involved in the scheme to secretly sell the book.

Lawrence wrote Lady Chatterley’s Lover in 1927, and initially sent it to his publisher Martin Secker in London.

After it was rejected on the grounds of obscenity, Lawrence published the book privately in 1928 with the help of the Florentine bookseller Pino Orioli.

They printed 1,000 first edition copies, which were then sold via mail order, as the book’s notoriety quickly made it infamous.

Scotland Yard began intercepting and confiscating copies of the banned book as Orioli sent them from Italy, but they had no idea that another hidden stash already existed in the U.K.

To obtain a copy, the buyer would send an order to Orioli, who would then forward the cheque to Lawrence in Switzerland.

Lawrence would then contact his two associates in Britain, Richard Aldington and S. Kotelinansky, who would post the book out to its new owner.

It wasn’t until 1960 that the uncensored book was finally published in the U.K, following a trial in which Penguin Books was prosecuted under the Obscene Publications Act.

The jury found the publisher not guilty, stating that the work had sufficient literary merit to be printed in its original form, and the landmark ruling helped change censorship in Britain forever.