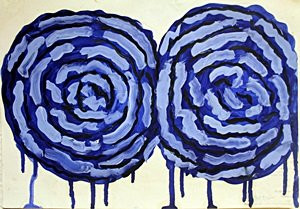 Two Roses, a work on paper by Cy Twombly, will star in Buy Art Auctions’ April Art and Jewellery Liquidation Sale on April 8.
Twombly was an American modernist painter who spent much of his career living and working in Italy.

The value of his work has grown substantially in recent years. Last year an untitled work sold for a record $70.5m.

The fact that Twombly only created around 600 works over the course of his life means that demand is as strong among museums as it is collectors, leading to inflated values.

While Buffet was hugely successful, his work was derided as kitsch by many in the French art establishment – including Picasso, who detested him.

In recent years, however, there has been a revival of interest in his work. The present lot is one of several works on paper featured in the sale.

De Kooning was one of the founding figures of the abstract expressionist movement.

In 2015, his Interchanged became the world’s most valuable painting when the David Geffen Foundation sold it to billionaire Kenneth C Clarke for $300m.