We’re just a day away from the start of COINEX 2016 in London – and it’s shaping up to be another spectacular event in the British capital.
It’s the 38<sup>th</sup>&nbsp;outing for&nbsp;the fabled coin show, run by the British Numismatic Trade Association. This year’s event, as ever, takes place at the Millennium Hotel in Grosvenor Square, Mayfair and runs from Friday September 30 to Saturday October 1.

What can you see there?

All things numismatic. Coins from all ages and nations, banknotes, medals, tokens, and even rare books on coin collecting. A few antiquities will also sneak in.

With more than 80 international dealers exhibiting, there will be something for every numismatist. Many visitors simply go to look at the wondrous pieces on offer – with no intention of buying. Yet if you’re planning on making a purchase, there’s one piece of advice to follow…

If you’re looking to buy, we strongly suggest you get down tomorrow when the doors open at 11:00 – before all the rarities and the bargains have gone. Tickets for entry at this time are £30, but will be worth every penny for the buying opportunities on offer.

Prices for entry after 13:00 on Friday are £5, while those for Saturday are free – evidence the organisers are expecting all the top items to be long gone.

Are there auctions as well?

Yes. St. James’s Auctions, the event’s main sponsor, is hosting its Premier Sale on Friday evening at the hotel, after the show has closed for the day. There will be some magnificent coins and medals on offer. The highlight will be a George III 1820 gold £5 pattern coin, designed by Benedetto Pistrucci. Never issued, this beautiful example has a £275,000 ($365,819) valuation. A smaller auction gets things underway on Thursday.

Dix Noonan Webb (DNW), Baldwin’s and Spink – all exhibitors at COINEX – will also be hosting auctions in their London showrooms. DNW will be offering a 790-lot auction of banknotes on October 3, while Spink offers modern British paper money the same day.

How to get to COINEX

Don’t be alarmed if you see lots of police wielding guns as you approach COINEX. The hotel shares Grosvenor Square with the US Embassy. 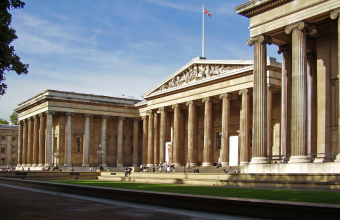