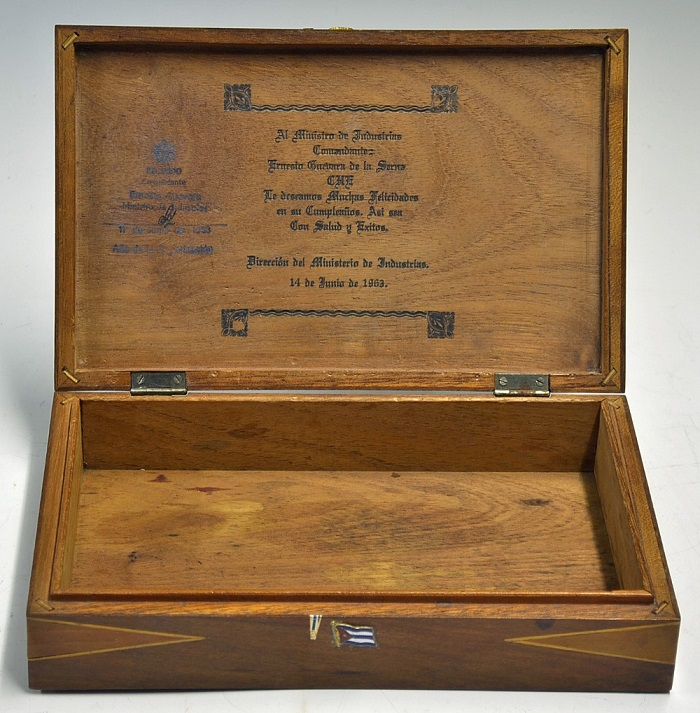 A cigar box once owned by Che Guevara has sold for £12,000 ($16,770) at auction in Shropshire.
The decorative wooden box featured the Cuban coat of arms, and was presented to Guevara as a birthday gift in 1963 by his&nbsp; staff at the Cuban Ministry of Industry, which he headed up following the Cuban Revolution in 1959.

The carved inscription on the box read: “To the Minister Of Industry Commandant Ernesto Guevara of the Serna CHE We wish you much happiness on your birthday. That it will be with health and success. Head Office of the Ministry of Industry. June 14, 1963”.

As well as serving as minister of industries, during which time he instituted sweeping agrarian land reform, Guevara also helped create a successful nationwide literacy campaign, served as both national bank president and instructional director for Cuba’s armed forces, and as an international diplomat for Cuba’s socialist cause. He left Cuba in 1965, and was later executed by U.S forces in Bolivia.

Today Che Guevara memorabilia is highly sought-after by collectors, and experts at Mullock’s believed the cigar box was the first of Guevara’s personal possessions to ever hit the auction block.

The box was amongst the leading items at the Mullock’s sale of Toys, Collectables and Historic Ephemera. Further notable lots included a pair of Adolf Hitler’s personal, Swastika-shaped gold cufflinks, which sold for £1,600.