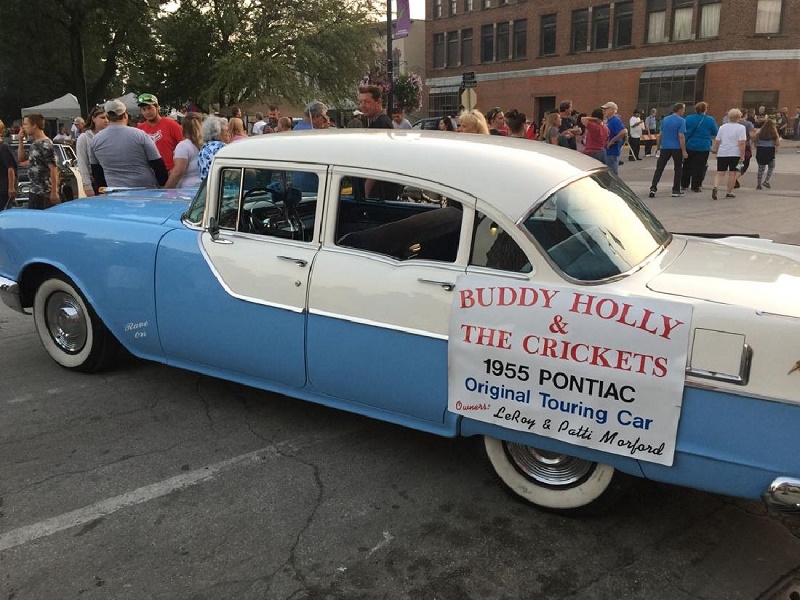 The ‘Cricketmobile’ used by Buddy Holly and the Crickets during the earliest days of their career is heading for auction next month.
The piece of rock and roll history is set to sell for more than $40,000 when it hits the block at the Mid-Hudson Auction Galleries in New York State on August 18.

When Buddy Holly graduated in 1955, he decided to pursue a music career and put together a band including his high school friend J. J. (Jerry) Allison on drums.

Holly performed as a local opening act for the likes of Elvis Presley and Bill Haley & The Comets, before landing as recording contract and signing on to a tour featuring headline act Faron Young.

Allison’s father decided to help out the band and bought them a car to tour in – the 1955 Pontiac Chieftain.

He purchased it from Johnson & Connolly Motors in the band’s hometown of Lubbock, Texas, and the band soon hit the road, initially billed as ‘Buddy Holly and the Two Tones’.

According to the car’s owner, Allison claimed the band had three very good reasons for choosing such a large car:

"They wanted something safe, they had a lot of equipment to haul and they had to have a lot of room for women."

The group travelled extensively in the car throughout their rise to fame in the late 1950s, and when Holly left to pursue a solo career in 1958 it remained the official ‘Cricketmobile’.

Following Holly tragic death in February 1959, the band retained the car, before finally selling it in 1961.

Decades later, and having passed through the hands of several owners, the car was tracked down by Buddy Holly super-fans LeRoy and Patti Morford of Marshalltown, Iowa.

They were initially given a tip-off about the car by none other than Peggy Sue Gerron, Allison’s former wife and the inspiration behind the classic 1957 Buddy Holly song.

Having acquired the Pontiac from Texas collector Howard Walker, the couple then spent years completing a ‘nuts and bolts’ restoration, before regularly exhibiting it at shows across the U.S.

The car also became a popular attraction at the Winter Dance Party, an annual event commemorating the lives of Holly, Ritchie Valens and The Big Bopper, held at the Surf Ballroom in Clearlake, Iowa – the final place they performed before their fatal air crash.