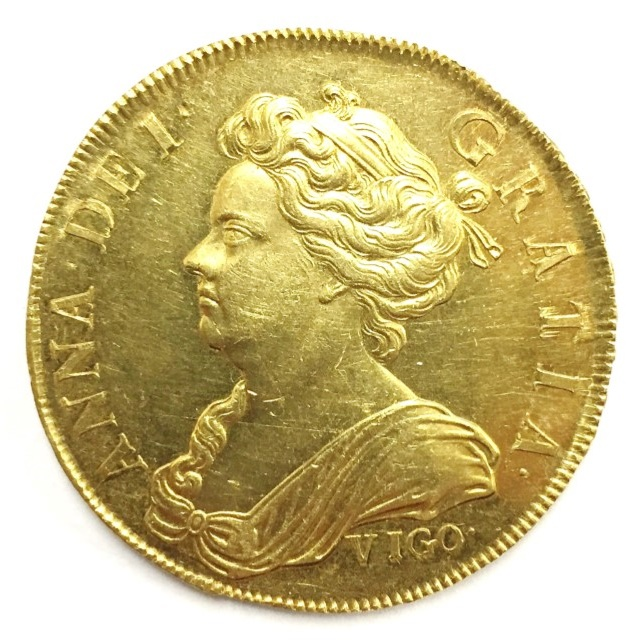 A highly rare 18th century gold coin discovered in a child’s toy box could sell for more than $300,000 at auction next month.
Boningtons auction house near London is set to offer a Queen Anne ‘Vigo’ 5-guinea gold coin dating from 1703, which was originally made with gold stolen from the Spanish fleet by British pirates.

Centuries later it ended up in another pirate chest – this time belonging to a young boy who used it as pretend treasure, unaware it was a genuine piece of pirate booty worth a fortune.

"The coin was consigned to us by a gentleman from Hertfordshire whose grandfather had given it to him many years ago when he was a young boy," said Boningtons spokesman Luke Bodalbhai.

"However, he had no idea what it was worth until recently, when he showed it to our coin specialist, Gregory Tong. Gregory immediately recognized the coin and informed the consignor of its value."

The story of the coin begins in 1702, as the British fleet was returning from a failed attempt to capture the Spanish port of Cadiz. The fleet encountered Spanish ships returning from the Americas with a haul of gold and attacked, claiming the treasure for themselves before returning to London.

The Royal Mint, then run by Sir Isaac Newton, received 7.5lbs of gold, and produced just 20 of the coins. Centuries later the coin found its way into the hands of an English collector, who gifted it to his grandson to play with as a child.

"My granddad travelled all over the world during his working life and collected many coins from the various countries where he had been,” said the consignor. "As a boy, I was into pirate treasure, so he gave me bags of coins to play with. As time passed, these coins went back into bags and boxes and were forgotten about.

"Then, after my granddad passed away, I rediscovered the coins and recalled how much I had enjoyed them as a boy. So I gave them to my own son to play with, including the Queen Anne Vigo 5-guinea. He kept it in his treasure box and has been playing ‘pirate’ with it just as I did, all those years ago."

The 1703 Queen Anne ‘Vigo’ 5-guinea gold coin has been described as "Britain’s rarest coin", and today just 15 examples are known to survive.