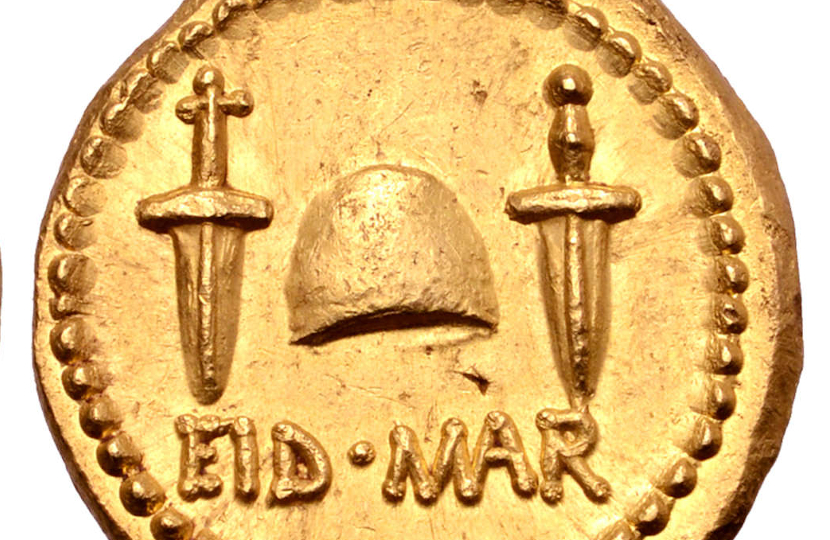 An incredibly rare Ancient Roman coin celebrating the assassination of Julius Caesar could sell for millions at auction later this month.

The gold ‘Ides of March’ coin is one of only three known examples, and was recently discovered after spending years hidden in a private European collection.

The coin was previously unrecorded by experts, and was recently submitted for grading by the Numismatic Guaranty Corporation.

Remarkably, the coin remains in mint condition despite being 2,000 years old and has been described as “the undisputed masterpiece of ancient coinage.”

The coin was produced to celebrate the death of Roman Emperor Julius Caesar, who was famously murdered by a group of his own senators led by Brutus and Cassius in 40 B.C.

“It was made in 42 B.C., two years after the famous assassination, and is one of the most important and valuable coins of the ancient world,” said Mark Salzberg, Chairman of Numismatic Guaranty Corporation.

“The front has a portrait of Marcus Junius Brutus, one of Caesar’s assassins, and the other side dramatically has two daggers and the words EID MAR, a Latin abbreviation for Ides of March.”

The coin features a pair of daggers – the murder weapons used to kill Caesar – along with a pileus, a cap of given to Roman slaves when they were freed.

It was a symbolic statement that Rome had been liberated from the tyrant Caesar.

Although approximately 100 silver examples of the coin are known to exist, there were just two in gold; the first is in the British Museum on loan from a private collector and the second is in the Deutsche Bundesbank collection.

The newly-discovered third example will now hit the auction block on October 29 at Roma Numismatics Limited in London.