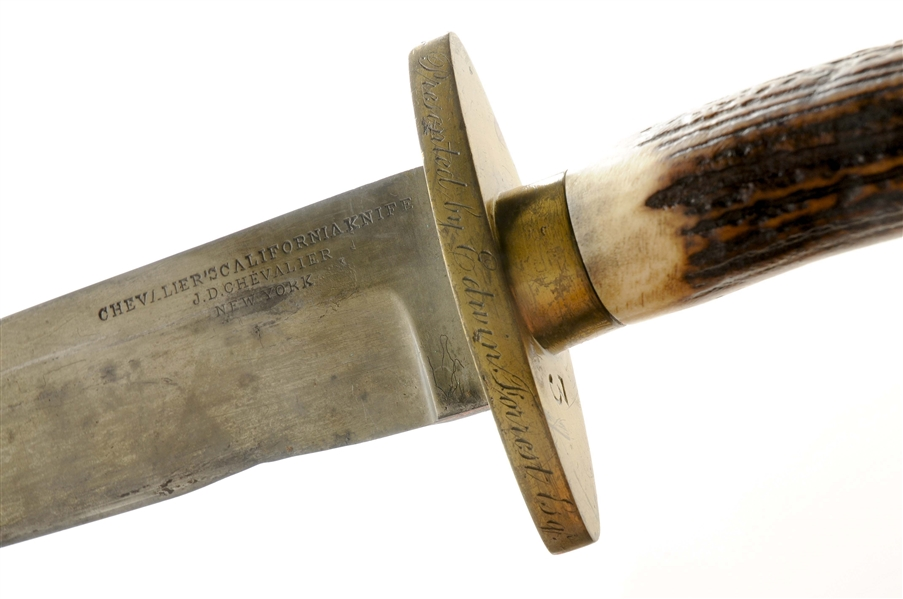 A Bowie knife owned by Rezin Bowie, brother of the American folk hero Jim Bowie, could sell for up to $200,000 as part of an upcoming sale at Morphy Auctions.
The historic knife is one of the leading lots in a special sale of Americana, focusing on Gold Rush memorabilia and Native American artefacts, which takes place in Las Vegas on January 19.

The Bowie knife was originally made famous by the exploits of Jim Bowie (1796-1836), a frontiersman who played a major role in the Texas Revolution and died at the famous Battle of the Alamo.

Although the exact origins of the Bowie knife remain murky, the design was made famous in 1827 following The Sandbar Fight, in which Jim Bowie killed Major Norris Wright during a brutal knife fight and managed to survive, despite serious injuries.

Following the fight, the Bowie brothers received requests for knives of the same design, and a legend was born.

As the story goes, in 1835 Rezin Bowie commissioned four special presentation knives from the New York manufacturer Chevallier, and gave them as gifts to his close friends in honour of his famous brother’s feats.

The first three knives were presented to Governor E.D. White of Louisiana, Lieut. H.W. Fowler of the U.S. Dragoons, and a Mr. Stafford of Alexandria, Louisiana.

The fourth knife was given to Edwin Forrest, the famed American Shakespearean actor, who befriended both the Bowie brothers during theatrical tours of the Southern states in the 1820s.

Forrest’s fierce rivalry with British actor William Charles Macready sparked the notorious Astor Place Riot in 1849 between fans of both men, during which 25 people were killed at the Astor Opera House in Manhattan following a performance of Macbeth.

In 1849 Forrest gave the knife to Joseph Davis, an American planter and brother of Jefferson Davis, who served as the President of the Confederate States of America during the American Civil War.

The well-documented knife was later featured in Robert Abel’s 1967 book ‘Classic Bowie Knives’, and still bears the number ’44’ in red paint on the blade from where it was catalogued and photographed for the book.

The historic knife features a 10" clipped point, a stag hilt with oval brass guard and pommel, and a brass mounted leather scabbard with brass tip.

As a remarkable artefact from the American frontier, with a direct link to one of the nation’s most famous pioneers, the knife will be offered with an estimate of $100,000-$200,000.