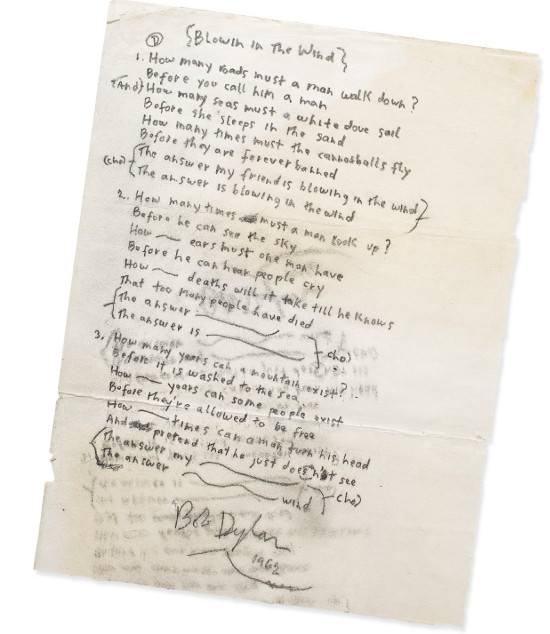 Bob Dylan’s handwritten lyrics to Blowin’ in the Wind have sold for $324,500.

They topped Sotheby’s A Rock & Roll Anthology: From Folk to Fury auction in New York on December 10.

Dylan penned the famous song in April 1962, a year after moving from Minnesota to New York.

That same month Dylan taught the song to friend Gil Turner. The pair’s separate renditions of the tune in Greenwich Village brought it huge attention – and resulted in several parodies, including one called Blowin’ out your End.

Peter, Paul and Mary released their recording of the original song in June 1963, three weeks after Dylan’s version had appeared on his second album, The Freewheelin’ Bob Dylan. The trio’s offering was a global hit, giving Dylan his first major royalty cheque.

A letter from Dylan expert Clinton Heylin that accompanied the lot explained it was one of several handwritten examples of the song.

“There are four manuscript versions known to exist,” he said. “A fragment dated April 12, 1962; a version that appears to be a ‘final working draft’ on Taft Hotel stationary from late April/ early May 1962, a fair copy given to ‘Sis Cunningham around May 1962, reproduced in The Bob Dylan Scrapbook, and this three verse version of the song which also appears to be an original period manuscript in the hand of Bob Dylan.”

The auction record for a handwritten set of lyrics, by any artist, is the $2 million achieved by Dylan’s Like a Rolling Stone in 2014.

The weekend’s auction also featured the $50,000 sale of a jacket John Lennon wore in the Beatles’ Help! film, while a pair of Lennon’s iconic wire rimmed glasses achieved $43,750. 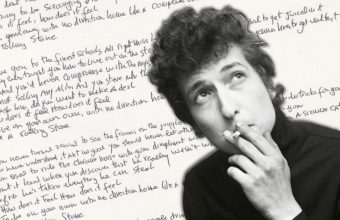