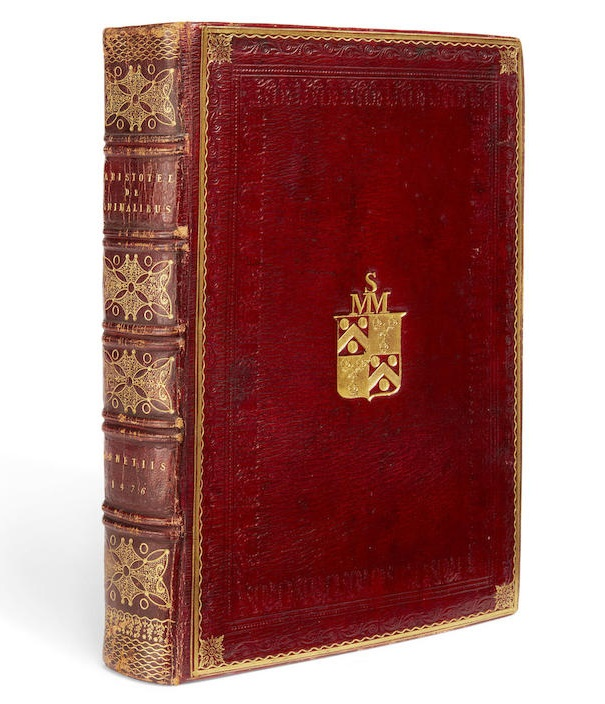 One of the world’s rarest and most beautiful books will be offered for sale at Bonhams in New York next month.
The Fine Books and Manuscripts sale on June 8 will feature a first-edition copy of Aristotle’s De animalibus (On Animals), printed on vellum in Venice in 1476.

"Books like this come up for auction once in a generation," said Director of Books and Manuscripts Christina Geiger. "Not only is this first edition exceedingly important in the history of thought, but it is also exceedingly beautiful. Few books so perfectly epitomise the Renaissance."

Aristotle (384-322 B.C) is regarded as history’s first scientist, and De animalibus is the earliest known work of empirical natural history. Featuring more than 500 species, the three-volume book was the most important source of zoological information for 2,000 years.

Following the invention of the printing press by Johannes Gutenberg in the 1450s, De animalibus was the very first biological text to be printed using the new process. The Latin translation had been commissioned by Pope Nicholas V, founder of the Vatican Library, and was printed in Venice in 1476 by John of Cologne and John of Manthen.

A handful of deluxe copies of the work were printed on the finest vellum before being illuminated by hand. Today just two of these vellum copies are known to have survived, with one owned by the Bibliothèque nationale in Paris. The second, the example offered at Bonhams, was lost for more than a century before being rediscovered in eastern Tennessee in late 2015.