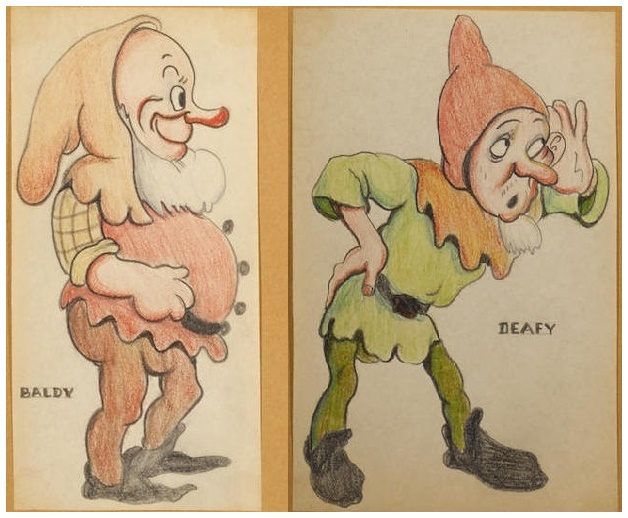 A treasure trove of Snow White and the Seven Dwarfs memorabilia has sold at Bonhams, including sketches of dwarfs that didn’t make the final cut.
The auction, held in conjunction with Turner Classic Movies, featured original art from some of the most famous animated films in movie history.

Released in 1937, Snow White and the Seven Dwarfs was the first full-length cel animated feature ever made. It was dubbed "Disney’s folly", as nobody had attempted such an expensive project, but it proved a huge critical and commercial success, and allowed Disney to build his studio with the profits.

This pre-production sketch, dating from 1935, shows that some of the dwarfs originally looked very different to how they appeared in the final film.

It also includes two characters that were replaced as the film moved into production. By December 1935 Walt Disney himself had finalized the line up, with Bashful and Sneezy (perhaps thankfully) replacing dwarfs named Baldy and Deafy.

As an artefact from behind the scenes of the classic film, this fascinating piece of Walt Disney history sold for $3,750.

One of the auction’s biggest sellers was a stunning original cel featuring the Evil Queen, as animated by Art Babbitt, which fetched a final price of $15,000.