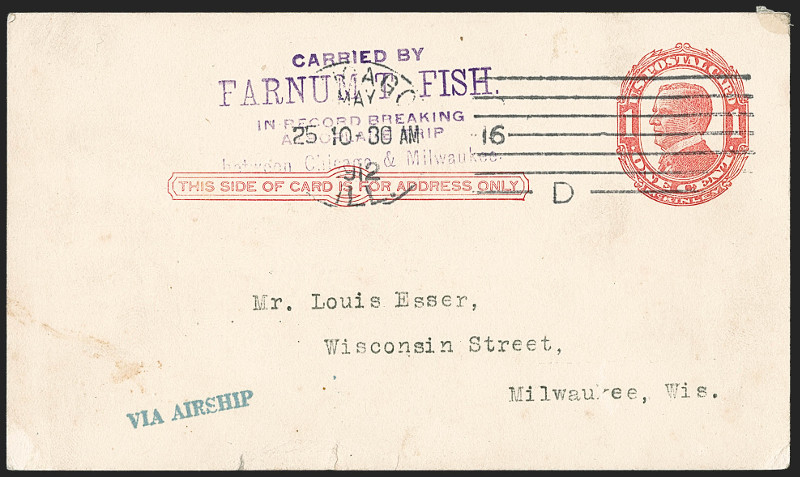 Robert A Siegel is to offer a spectacular selection of early US airmail. The James P Myerson Collection of Pioneer Flight Mail 1910-1916 auction will take place in New York on March 8.
Among the star lots will be a May 25, 1912 cover carried by the superbly named Farnum T Fish on his record breaking flight from Chicago to Milwaukee.

Fish learned to fly at the Wright Flying School in Dayton, Ohio when he was just 15. His apprenticeship consisted of four hours training from Orville Wright, after which he was granted a licence. His father was well off, so Fish managed to get hold of a Wright Model B plane, which he regularly landed in public parks – driving the local constabulary into a frenzy and earning him the nickname the “Boy Aviator”.

Fish completed the Chicago to Milwaukee flight (sponsored by the Milwaukee Journal) in a record 2 hours and 20 minutes. He carried a cargo of newspapers, mail and between 50 and 300 pounds of silk for a Milwaukee department store. This cover was one of the letters onboard.

It bears a purple cachet that reads: “CARRIED BY/FARNUM T. FISH/IN RECORD BREAKING/AEROPLANE TRIP”. On the reverse is a typed message: "This postal comes to you via first mail carried by airship between Chicago and Milwaukee. Yours very truly, The Journal Company”.

The lot is one of four surviving examples from the flight and the only one in private hands. It’s valued at up to $9,500.