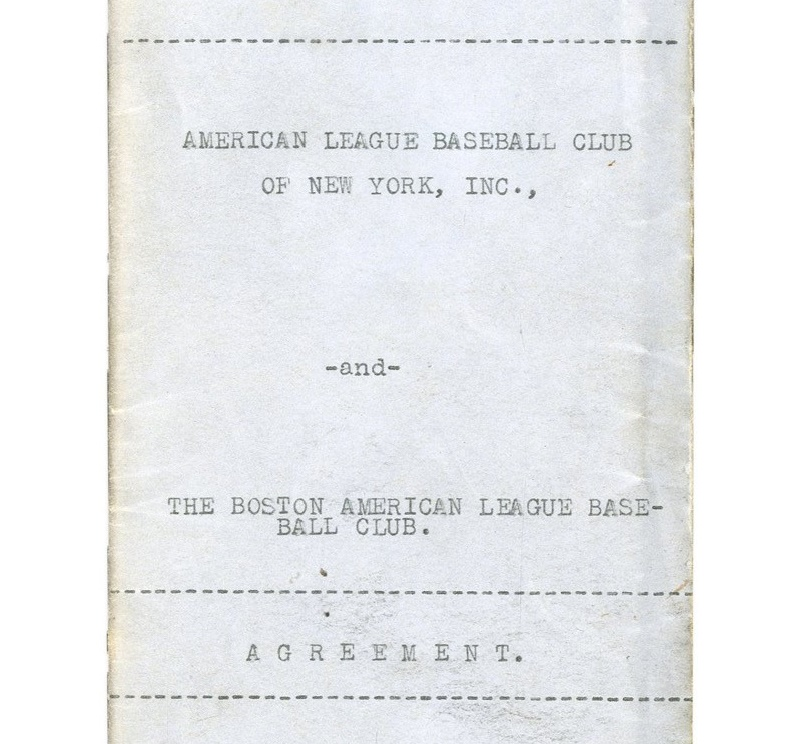 An original copy of the contract which took Babe Ruth to the New York Yankees heading for auction at Leland’s next month.
The document is expected to top the previous price of another identical copy, which sold for almost $1 million back in 2005.

The auction house has described the deal as "the most important transaction in sports history", and compared the contract to historic documents such as the Gettysburg Address or Albert Einstein’s ‘Theory of Relativity’.

Babe Ruth began his Major League career in 1914 as a pitcher with the Boston Red Sox, but was controversially sold to rivals the New York Yankees in 1919 for $25,000.

He went on to become the most famous player in the history of baseball, with his huge home runs and larger-than-life personality helping to popularize the sport.

The move also sparked a period of domination for the Yankees, and he helped to numerous championships and set hitting records that remain to this day.

Many Boston fans believed the sale brought a streak of bad luck down upon their club, known as ‘The Curse of the Bambino’, which prevented them from winning the World Series for 86 years.

The contract for sale at Leland’s is one of three original copies created during the deal.

The first copy was given to Red Sox owner Harry Frazee, and passed down through his family before selling at Leland’s in 1993 for $99,000.

Twelve years later the contract hit the market again, this time at Sotheby’s in New York, where it soared to a final price of $996,000, setting a record price for any historic sports document.

The second copy was that given to Yankees boss Jacob Ruppert, and was previously owned by the legendary baseball memorabilia collector Barry Halper.

The contract was sold privately by Lelands in 1993, a week after the first contract hit the block, and has remained in the same private collection ever since.

The third copy was that kept on file by the American League as a record of the transaction, and has yet to appear on the market.

Babe Ruth signed documents are amongst the most treasure items in baseball history.