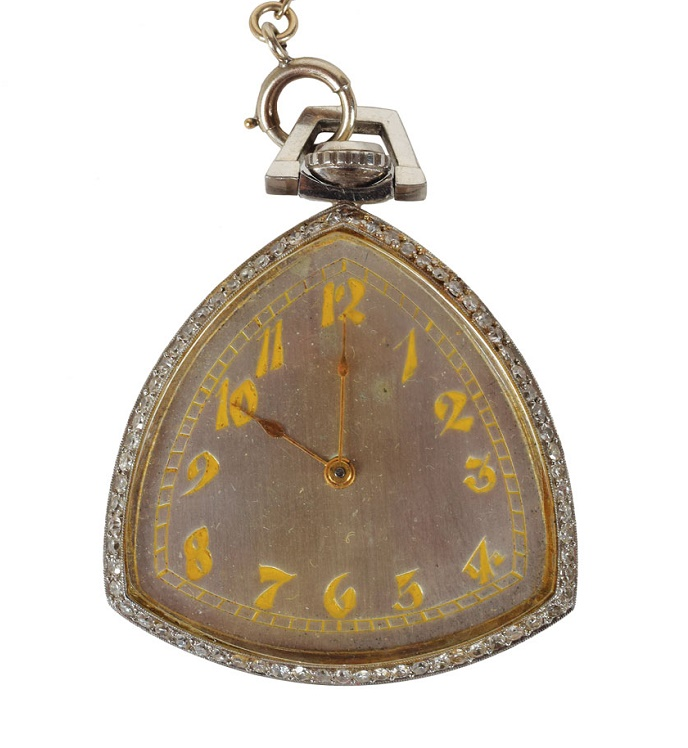 A pocket watch once owned by notorious crime boss Al Capone is up for auction in Boston.

The watch is amongst the star lots of a special RR Auction sale on June 24, dedicated to famous gangsters, outlaws and lawmen.

The diamond-studded timepiece is dated circa 1928-29, during which time Capone is alleged to have ordered the St Valentine’s Day Massacre which killed seven rival gang members in Chicago.

Capone was eventually jailed for tax evasion in 1931, and died in 1947, after spending his last years debilitated by syphilitic dementia.

Capone rose to power in the 1920s as the head of the Chicago Outfit, a violent crime syndicate responsible for bootlegging alcohol during the Prohibition Era.

During his reign Capone cultivated his image as a successful entrepreneur, claiming “I am just a businessman, giving the people what they want”.

He always wore expensive suits and flashy jewelry, and asked his close friends to nickname him ‘Snorky’, a slang term which meant ‘sharp’ or ‘well-dressed’.

This sartorial elegance extended to members of the Chicago Outfit, and Capone insisted his men dress smartly at all times – even when they were gunning down his enemies.

The Art Deco-style triangular pocket watch was manufactured by the Illinois Watch Company, and features a platinum face with gold numerals and 72 cut diamonds.
Capone’s initials “AC” are spelt out on the back in a pattern using 46 further diamonds.

The sale also includes another fascinating Capone item, which shows the more creative side of the gangster’s explosive personality.

Whilst incarcerated in Alcatraz 1934, Capone spent a year convincing the warden to allow inmates to play musical instruments before finally getting his wish.

Capone then learned to play the banjo, and formed a prison band called ‘The Rock Islanders’ which included fellow gangster George ‘Machine Gun’ Kelly on the drums.

However, it wasn’t long before the band split up – apparently due to musical differences – and Capone spent much of his sentence composing songs on his own.

This rare handwritten manuscript features the music and lyrics for one of Capone’s original compositions, and is entitled ‘Humoresque’ – a term used to describe a short, lively and romantic piece of music.

“Strains of humoresque divine, you thrill and fill this heart of mine, with gladness like a soothing symphony. Over the air, you gently float, and in my soul, you strike a note, of passion with your melody.”

The second known musical manuscript by Capone, entitled ‘Madonna Mia’, was a love song about his wife Mae, which he gifted Vincent Casey, a Jesuit priest who provided spiritual counsel to prisoners in Alcatraz during the 1930s. 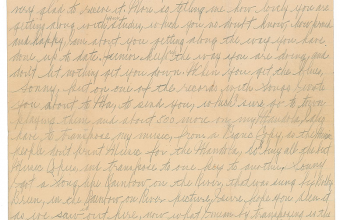