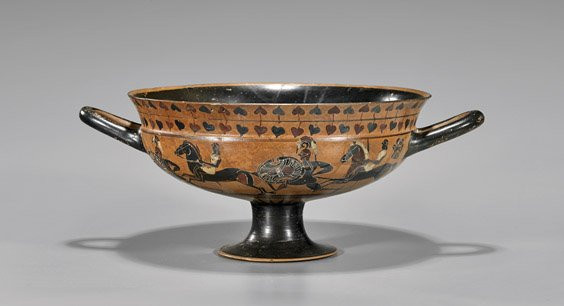 An Attic black Siana cup is up for auction at IM Chait in LA on March 1 with an estimate of $36,000-38,000.
It depicts a harpy being chased by hoplites and cavalry and remains in exceptional condition considering that it dates back to around 550-500 BC.&nbsp;

The name Siana references the first location that one of the cups was found (in the necropolis of Siana).

They are characterised by the use of black figures (as opposed to other Greek pottery where red figures were used) and originate from the region around Athens.

Bastet was a central figure in the Ancient Egyptian pantheon as far back as the Second Dynasty (2890 BC) and was worshipped as the goddess of war in Lower Egypt prior to unification.

The present lot likely dates to sometime around or after the period of the Middle Kingdom (2055-1650 BC).

This is when Bastet began to be depicted as a domestic cat.

Her role as a goddess also changed, moving from representing war to fertility and domesticity.

Other items featured in the sale include a statue of the Ancient Egyptian pharaoh Khafre carved in black stone.

The lot is not ancient, however. It dates to era of the Grand Tour (17th century to 19th century), when wealthy young men would make a cultural pilgrimage from England down to Italy.

The present lot was produced as a replica of the original, which is housed in Egyptian Museum in Cairo.