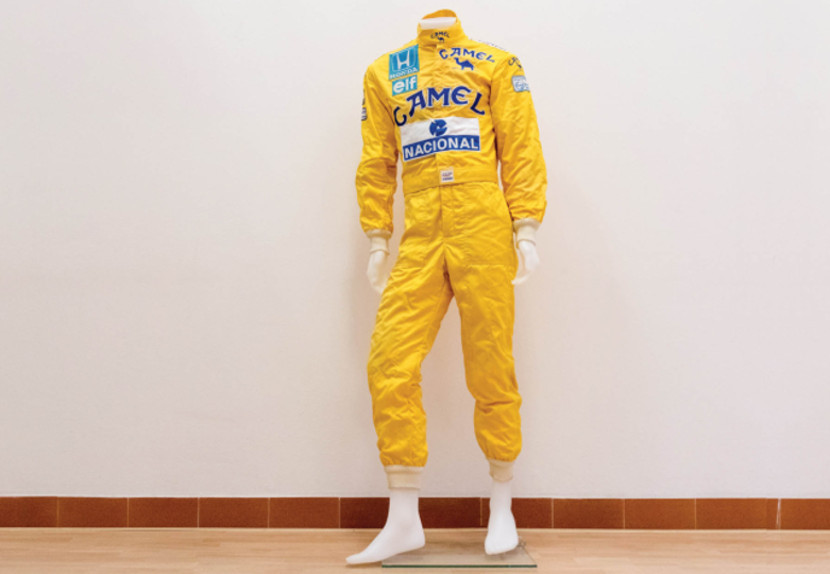 A racing suit worn by the great Brazilian F1 driver Ayrton Senna during his 1987 season with Lotus will star in RM Sotheby’s Monaco auction on May 12.
A special thrill for the new owner will be the fact Senna wore the bright yellow suit during his victory at Monaco that season – his first at the classic street circuit. Senna later gifted the suit to his psychotherapist’s brother, signing it on the “Nacional” patch.

The auction house comments: “A reminder of Ayrton Senna’s incredible talent and indelible mark on Formula 1, this race suit offers the chance to own a tangible piece of F1 history.”

The piece is offered without reserve but is likely to sell for a sum close to $100,000. One of Senna’s 1991 McLaren racing suits sold for $68,526 in 2014. However, that example did not have provenance linking it to a Monaco victory.

Senna was one of the most talented racing drivers of his generation, picking up a huge number of trophies during his brief but glittering career. Senna’s tragic death on the track in May 1994 sent shockwaves across the world.

He’s become a great icon of the sport, memorialised at tracks across the world. This has had a massive effect on his memorabilia, which is by far the most sought after in Formula 1.

Bonhams will offer the McLaren MP4 Senna raced to victory in the 1993 Monaco Grand Prix, his final appearance there, in its Monaco sale on May 11. Will the car beat the $7.5m record set for Michael Schumacher’s Ferrari F2001 last year? It looks likely. We’re expecting it to breach $10m.