A violin gifted to Albert Einstein on his arrival in the US in 1933 has sold for $516,000 at Bonhams.
That’s more than three times its $150,000 estimate, a figure that chimes with the rising demand for Einstein memorabilia in recent years.

Einstein learned to play the piano and the violin as a child. He found music to be a great aid to thought.

His second wife, Elsa, explained: “Music helps him when he is thinking about his theories. He goes to his study, comes back, strikes a few chords on the piano, jots something down, returns to his study.”

Einstein himself went further. He said: “Life without playing music was inconceivable for me. I live my daydreams in music. I see my life in terms of music…I get most joy in life out of music.”

The violin was made especially for Einstein by Oscar Steiger, an amateur luthier and player in the Harrisburg Symphony Orchestra.

The interior is inscribed: “Made for the Worlds[sic] Greatest Scientist Profesior[sic] Albert Einstein By Oscar H. Steger, Feb 1933 / Harrisburg, PA”.

Competition is growing fiercer every year for the finest pieces of Einstein memorabilia.

The sale follows the auction of his Longines watch for $596,000 in 2008 and the record breaking $1.5m achieved last year for a cheery note given to a Japanese courier in 1922.

This magical object is supposedly imbued with the power to grant eternal life. However, Sir Isaac seems to have missed out a step or two as you can visit his tomb at Westminster Abbey today. 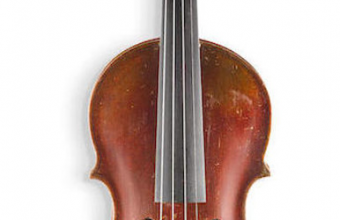