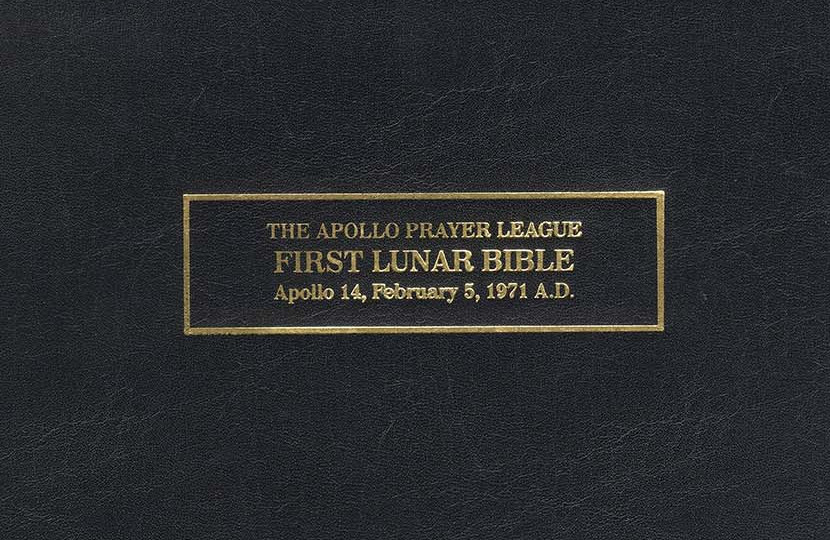 The Apollo Prayer Club had been trying to get a bible on the lunar surface since Apollo 12 (Image: Nate D Sanders)

Among the cargo carried aboard Apollo 14 was a set of 300 microfilm bibles, each measuring 1 inch square.

On July 26 Nate D Sanders will offer one with a minimum bid of $50,000 in a typically eclectic sale.

That bid reflects the additional rarity of this specimen, which is one of 100 bibles to have been carried onto the lunar surface by Edgar Mitchell – the lunar module pilot for the mission and the sixth man to land on the Moon.

The plan to carry a bible to the Moon was hatched during the Apollo 12 mission (1969) to honour Edward White, one of the astronauts who perished during the Apollo 1 disaster (1967). White was a committed Christian had spoken to his colleagues about taking a bible with him. The Apollo Prayer League came up with the idea of using microfilm to keep weight down.

A letter of provenance accompanying the lot reads (in part): ”I CERTIFY that this HOLY BIBLE Listed in the official Apollo Prayer League Lunar Bible Registry and containing all 1,245 pages of the King James Bible. / Was flown by Astronaut Edgar D. Mitchell to the Surface of the Moon on February 5, 1971…”

Bidding on a signed photograph of Bruce Lee starts at $16,000.

The lot is made out to Herb Jackson, who studied under Lee and became a close confidant. It’s inscribed: “To a dear friend of the family, Herb, Peace, Love, Brotherhood. / Bruce”.

There’s also a selection of equipment Lee gifted to Jackson, including a green sparring mask, a punching shield and a pair of five pound weights. Bidding on each of these items starts at $3,500.

A letter from Abraham Lincoln to a gun manufacturer during the Civil War is also offered, with an opening bid of $32,000.

The text dates to April 1862, when the war had been raging for a year. Lincoln is irritated by the variation in price between consignments of weapons and makes his feelings known.

He writes in part: “I certainly did not expect that, under the clause in question, a lot of guns would be appraised at one price at one time, and another lot, of precisely the same quality, appraised at different prices at another time – I expected that when, under the clause, the price of a particular quality of gun was fixed, it would stand throughout the transaction, neither going down nor up – I still think this is the just construction.”

Demand is highest for Lincoln letters associated with the Civil War and its immediate aftermath. The record for any document bearing his name is $3.4m, set for a handwritten speech he gave just after re-election in 1864.

This sale will also include a copy of a newspaper bearing Benjamin Franklin’s iconic “JOIN, or DIE” cartoon. It’s one of only two known examples in the world and the only one left on the private market.