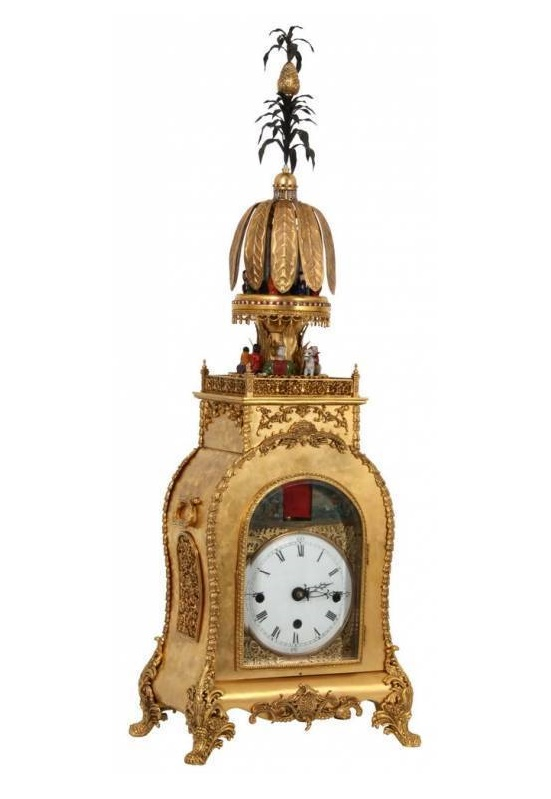 A rare animated Chinese clock soared to more than $330,000 as part of the latest sale at Fontaine’s Auction Gallery in Massachusetts.
The sale achieved a total of $1.6 million, with 510 lots snapped up by collectors inside a packed saleroom and a record number of online bidders from across the U.S and beyond.
"I knew we had put together a nice sale, with fine estate merchandise in a variety of desirable categories, but there was so much advance buzz in the days leading up to auction, I had to go back and look to see what all the fuss was about," said John Fontaine of Fontaine’s Auction Gallery. "That’s when I realized, hey, we really do have a great sale on our hands. And it was."

Topping the sale was the Gilt bronze animated Chinese clock, complete with a revolving carousel of figures and two sides – one decorated in a Chinese theme, and the other a Western theme. Believed to have been owned by a traveller with homes in both China and Europe, the rare clock brought a final price of $332,750.

Throughout the sale clocks brought strong results, across a distinct variety of styles. Further highlights included a Chinese triple fusee clock, housed in a carved teak wood bracket case and decorated with wooden acrobats, which sold for $102,850, the second-highest price of the night; a mahogany one-year Biedermeier Laterndluhr wall regulator clock which sold for $27,225; a George Jones astronomical floor regulator with a huge 17-inch bronze astronomical dial which fetched $16,940; and a stately E. Howard & Co street post clock which realized $41,140.

Antique lamps and lighting also proved popular, with notable lots including a set of 1920s hanging theatre lights from the old York Theater in Athol, Massachusetts, which sold for $20,570; an exceptional Tiffany Studios bronze and art glass chandelier with six arms and matching gold iridescent stalactite glass shades, which fetched $21,175; and a Tiffany banded Dogwood table lamp with a geometric brick pattern shade, which made $36,300.

The next Fontaine’s Auction Gallery sale takes place on May 21.