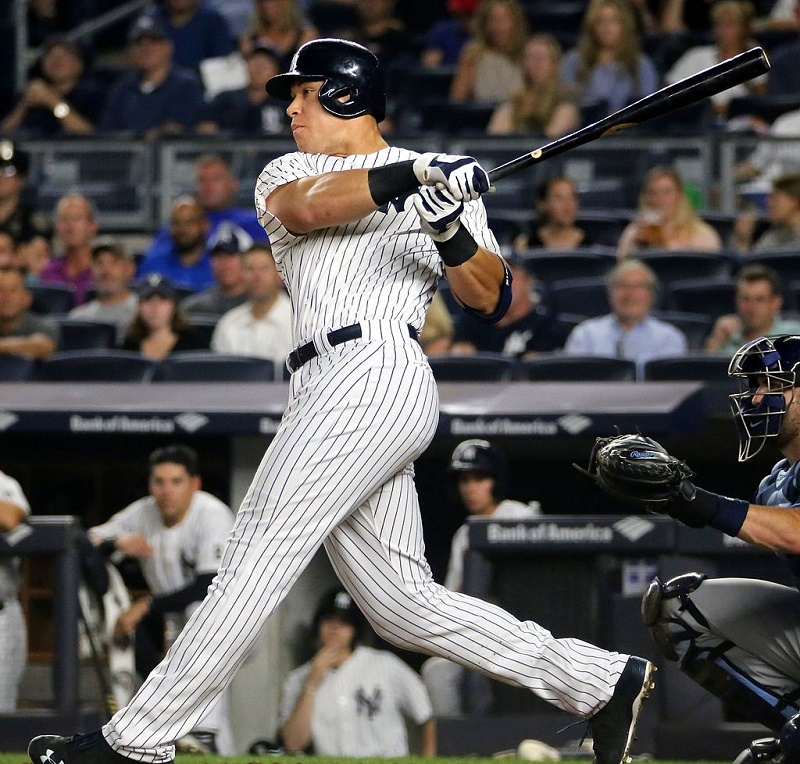 The New York Yankees jersey worn by Aaron Judge in his record-breaking MLB debut has sold for an astronomical price at auction.
The photo-matched pinstripe jersey crossed the block last weekend (July 29) at Steiner Auctions, where it sold for $160,644.

Judge made his debut for the Yankees on August 13, 2016, hitting a huge home run on his first at-bat which soared 446-foot into centre field.

Just moments earlier, Tyler Austin had marked his own debut with another home run – making them the first team mates in baseball history to hit homers in their first career at-bats during the same game.

The bats the two players used now reside in the Hall of Fame at Cooperstown, and are firmly ensconced in baseball history.

Judge is currently in the middle of a remarkable rookie season, during which he has already surpassed Joe DiMaggio’s home run record for a Yankees rookie.

He beat DiMaggio’s record of 29 with his 30th of the season on July 7 against the Milwaukee Brewers, and is currently on course to challenge Mark McGwire’s overall record of 49 home runs in a rookie season, which has stood since 1987.

With such statistics, it’s clear that some collectors are already banking on Judge rewriting the history books.

Before his debut season is even over, autographed copies of his rookie card are already selling online for more than $14,000; and earlier this year, his first career grand slam jersey, worn during Memorial Day Weekend, sold at Steiner Auctions for $45,578.00.

Following his winning performance at the 2017 Home Run Derby, in which he hit 47 homers in three rounds, Major League Baseball commissioner Rob Manfred called Judge a player "who can become the face of the game."

Sensing Judge’s potential to become an icon, bidders are getting in on the ground floor when it comes to his memorabilia.

$160,000 may seem a lot for a jersey from a player with less than 200 games under his belt – but if he goes on to become a legend of the modern game like Derek Jeter, it may seem like a bargain in years to come.