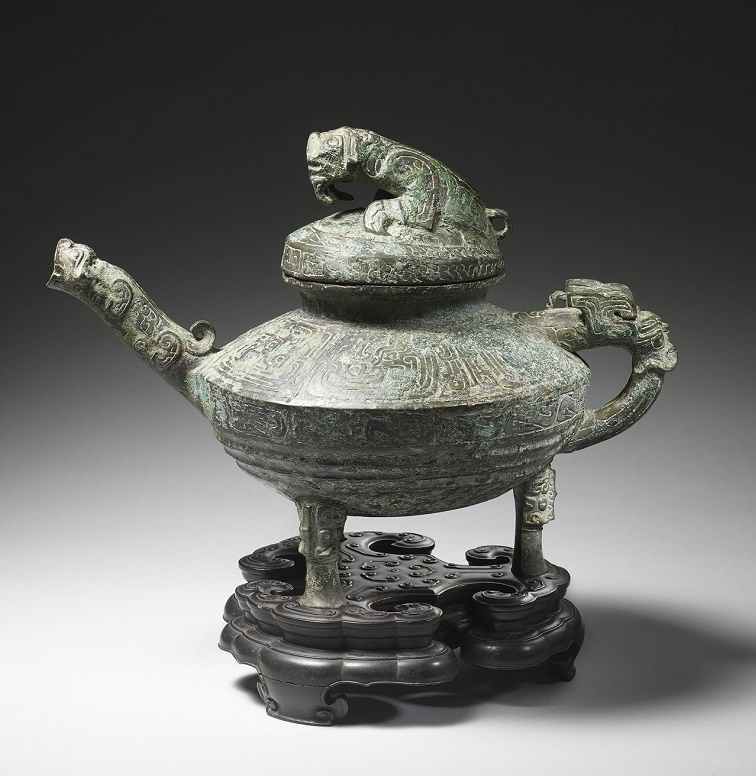 An ancient Chinese artifact discovered during a routine house call stunned auctioneers in the U.K this week when it sold for more than $700,000.
The exceptionally rare sacred Chinese bronze water vessel is believed to be 2,000 – 3,500 years old, and dates from the reign of the Western Zhou dynasty (1027-771 BC).

The vessel, known as a ‘Ying’, is one of only seven existing examples, five of which are owned by international museums.

It would have originally been used during sacred rituals, to cleanse the hands and feet of high status individuals such as members royalty and wealthy noblemen.

Just one was known to remain in private hands until the recent discovery, which features a previously unrecorded tiger figure, making it utterly unique.

Although it originated from the Summer Palace of the Chinese Emperor in Beijing, it was discovered in a very different location – a small English seaside town in Kent.

Alastair Gibson, a Chinese art expert with the Canterbury Auction Galleries, found the vessel during a routine house call to value a small collection of Chinese antiques.

It had reportedly passed down through the family of Royal Marines Captain Harry Lewis Evans (1831-1883), who served with the British military in China and took part in the Second Opium War of 1856 – 1860.

However, the sale of the ancient vessel has stirred up international controversy, as it was one of the countless treasures looted from the Emperor’s Summer Palace by British troops at the end of the war.

A letter from Evans himself recounted the looting of the palace, and how he came to own the various piece in his collection.

"From the palace on the plain I succeeded in getting several bronzes and enamel vases that will, I hope, some day find their way to [his home in the UK], as well as some very fine porcelain cups and saucers of the Emperors imperial pattern (yellow with green dragons) but they are so dreadfully brittle that I quite despair ever being able to get them home in their present condition…"

The Summer Palace was eventually burned to the ground by British and French troops, and an estimated 1.5 million artifacts were stolen.

In response to the auction, Chinese government official Wen Xuan stated prior to the sale: "We have consistently opposed and condemned the sale of illegally-discharged cultural relics.

"We hope the relevant agencies will abide by the spirit of the international conventions , respect the feelings of the people of the country of origin of the cultural relics, do not buy or sell illegally-run cultural relics, or conduct commercial hype in the name of such cultural relics."

However, Canterbury Auction Galleries maintained the consignors were the rightful legal owners of the vessel, and the sale went ahead on April 11.