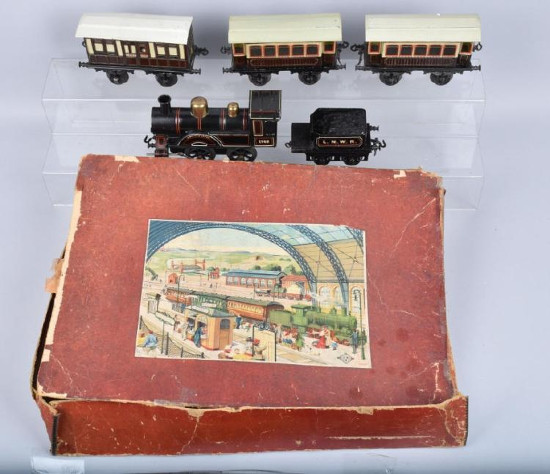 A 1902 Bing gauge 1 King Edward VII train set (including its original box) will star in a sale of vintage toys at Milestone Toys in Willoughby, Ohio.
The lot is valued at $600-800 ahead of the February 20 sale.

Bing was founded in Nuremburg in 1863 and began producing toys in the 1880s. It swiftly built a reputation as one of Europe’s superior manufacturers and was particularly renowned for its model trains.

At one time it was the largest toy maker in Germany.

However, the events of the first world war led to a decline in its fortunes and by the 1930s the company was out of business and its owners fleeing to the UK to escape the persecution of the Nazis.

The present lot is a classic example of the company’s output and features an LNWR King Edward VII type steam engine.

A Linemar tin Popeye moving friction van is another highlight, with a valuation of $300-500.

The lot features graphics displaying characters from the popular TV show and dates to the 1950s.

It’s a sought after piece that could sell for higher than estimate.

A Wyandotte steel La Salle with a wind-up motor carries a valuation of $300-500.

The lot features a blue paint scheme and is extremely rare.