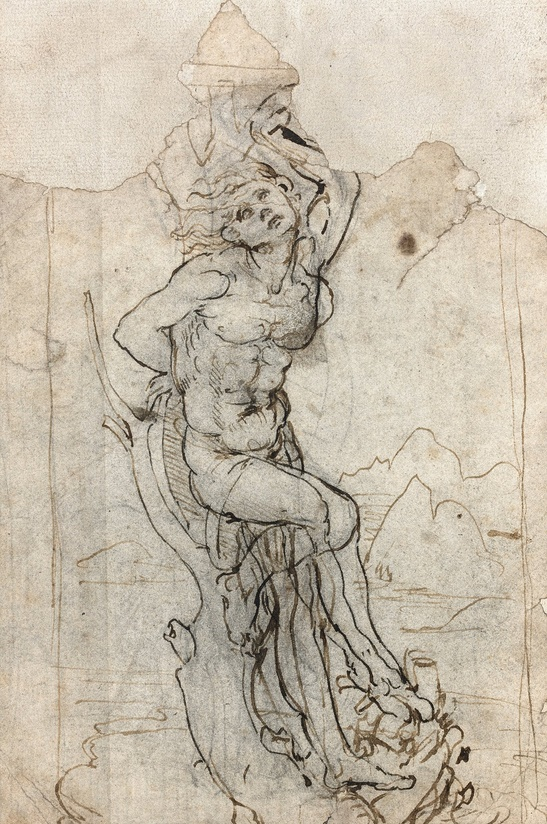 When a retired French doctor walked into a Parisian auction house with a bundle of drawing under his arm earlier this year, nobody knew he was carrying a treasure worth $16 million.
Old Master expert Thaddée Prate was asked to value the 14 unframed drawings, and came across the sketch of a bound figure resembling the Christian martyr Saint Sebastian.

"I had a sense that it was an interesting 16th-century drawing that required more work", recalled Prate.

Intrigued, he then enlisted the help of Patrick de Bayser, an expert in Old Master drawings, to examine it further. When Bayer found two smaller scientific drawings on the reverse of the sheet, along with notes written Italian Renaissance right-to-left hand, the two men could barely believe what they were seeing.

The miniscule notes were written by a left-handed man in a back-to-front script – a technique Leonardo regularly used, meaning the words could only be read by looking in a mirror.

"You can’t believe this is by Leonardo?" said Prate. "But that would have been so incredible."

Thrilled by their potential discovery, they then called in Carmen C. Bambach, a curator of Italian and Spanish drawings at New York’s Metropolitan Museum of Art, to confirm their suspicions.

"The attribution is quite incontestable," confirmed Dr. Bambach. "What we have here is an open-and-shut case. It’s an exciting discovery."

Bambach believes the sketch to be one of several made by Leonardo for a painting of Saint Sebastian, which was either unfinished or lost over the past six centuries.

Da Vinci himself mentions a group of eight Saint Sebastian drawings in his notebook the Codex Atlanticus, with two further examples surviving in the collections of the&nbsp; Bonnat-Helleu Museum in Bayonne in southwestern France and the Kunsthalle in Hamburg.

The sketch is the first new work by the genius Renaissance artist to be discovered in 15 years, and has been valued at up to $16 million.

According to a report by the New York Times, Prate and Nicolas de Moustier, director auction house, visited to the doctor to deliver the amazing news.

"I hope you’re not shocked?” Mr. Prate asked him.

I’m very pleased," replied the doctor, who had inherited the sketch from his father. "But I have other interests in life other than money."