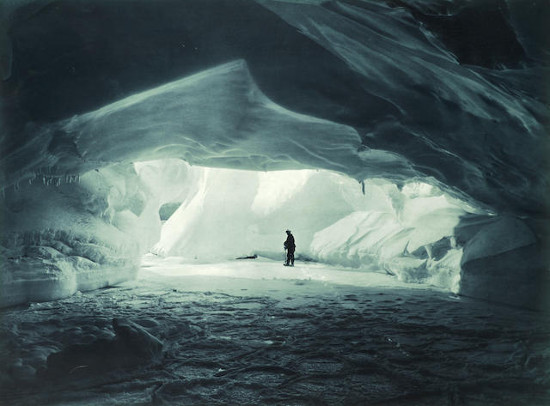 Historic travel and exploration memorabilia will auction at Bonhams London on February 7.
Among the most intriguing pieces offered in the sale is a rare photograph taken by Frank Hurley during the 1911-1914 Australasian Antarctic Expedition.

Led by Australian scientist Douglas Mawson, the trip proved one of the more fruitful visits to the Antarctic of the time.

While Shackleton and Scott are rather better known, it was Mawson’s earlier voyage that provided much of the data on the geology and biology of the southernmost continent.

Rather than attempting to strike inland, the crew stuck to a 2,000 mile stretch of coastline.

This being an early 20th century Antarctic expedition, it wasn’t all plain sailing. Two of the expedition’s 28 men died – one of Hypervitaminosis A caused by eating the liver of a sled dog.

This shot was taken in an ice cave and shows surgeon Leslie Whetter in the background.

Cherry-Garrard did not enjoy his time in Antarctica. In 1922 he published a tell-all book titled The Worst Journey in the World.

It opens: "Polar exploration is at once the cleanest and most isolated way of having a bad time that has ever been devised.”