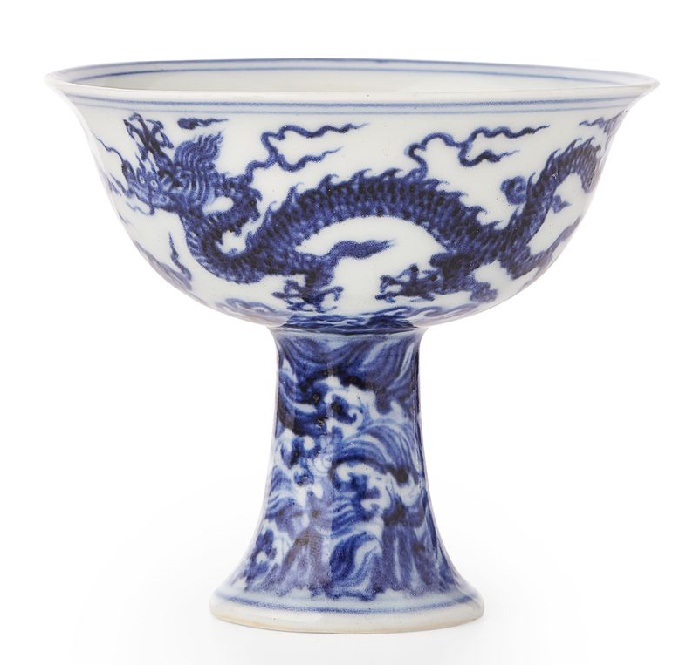 The inaugural Lyon & Turnbull sale in Hong Kong will be led by a 600-year-old Chinese Ming cup known as The Thornhill Stem Cup.
Described as "a rare masterpiece, virtually unseen outside museum collections", the cup was originally owned by Ernest Thornhill, a London pharmacist who assembled a remarkable collection of Chinese ceramics during the early 20th century.

Thornhill originally sent his collection of 270 pieces to Staffordshire University to safeguard it from bombing during WWII, and eventually bequeathed the items to the institution in 1944. Having spent years hidden away in storage, the collection was rediscovered in 1984 and re-valued in 2013.

With an estimated value of $3-$6 million placed on the stem cup, it will now be sold to safeguard the future of the rest of Thornhill’s collection, which also includes pieces dating back to the Shang (1700 –1028 BC) and Zhou (1027–221 BC) dynasties.

"Whilst to some it may seem unfortunate to have to sell one item from a collection, this is simply being done for the greater benefit of University students, and indeed the wider public," said Rosy Crehan, Deputy Vice-Chancellor of the University.

"The funds raised will finally allow the remaining 269 pieces to be curated, conserved and enjoyed in a facility that will attract a broader audience to Staffordshire, complementing what is, the heart of the British ceramics industry. An appropriate tribute to the Stem Cup will feature in this display."

The cup will now make its way to Freeman’s of Phildelphia on March 10-11, before heading to the Carlton Hobbs Gallery for exhibition during Asia Week New York on March 14-16.

It will then cross make its way to Hong Kong for exhibition on May 28-30, before the Lyon & Turnbull auction at the prestigious Liang Yi Museum on May 31.