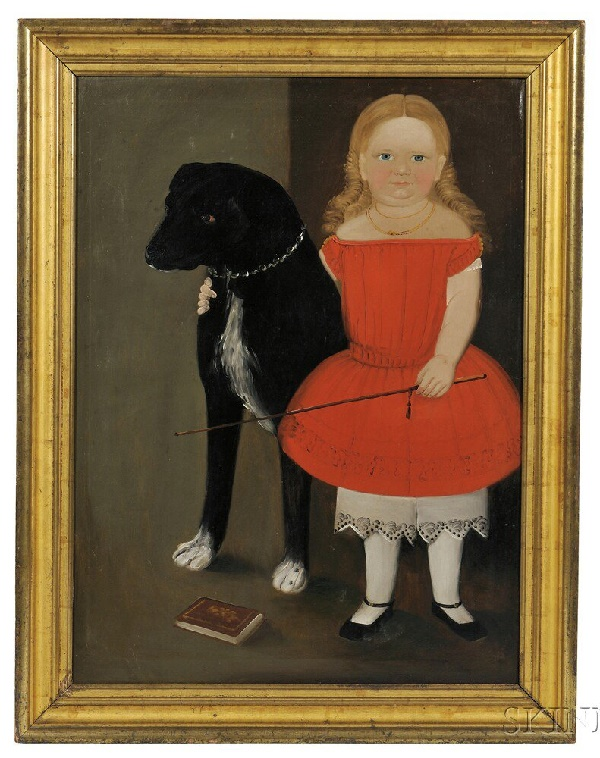 A superb selection of Folk Art leads the upcoming Skinner, Inc. sale of American Furniture & Decorative Arts in Boston.
Leading the line up of Folk Art and Portraiture is an early 19th century polychrome decorated overmantel painting on pine, painted circa 1815 at the Brainerd home in Haddam Neck, CT.

Depicting the capture of the United States frigate President by the British frigate Endymion in 1815, and described as "a masterpiece of American Folk Art", the panel is estimated to sell for $30,000-$50,000.

The folk art section also includes a pair of exquisitely painted fireboards, each expected to sell for $15,000-$25,000. The first, from Pennsylvania, depicts a natural landscape of birds and flowering shrubs on a faux tiger-maple frame, and the second shows a flowering potted plant alongside flowers, trees and vines.

The furniture section of the sale includes more than 100 lots of 18th and 19th Century furniture, mirrors, and clocks, with highlights including a set of six 18th Century carved mahogany side chairs estimated at $8,000-$12,000, a carved walnut tall case clock by Henry Taylor of Philadelphia, PA valued at $2,500-$3,500, and a carved mahogany ‘Cumberland’ dining table, attributed to Thomas Seymour of Boston, MA circa 1820, estimated at $4,000-$6,000.