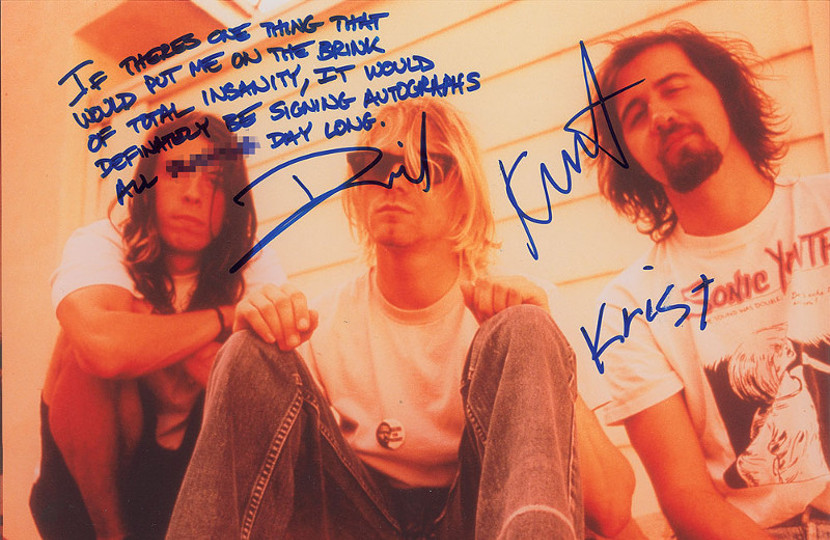 Drummer Dave Grohl includes a note that reads: "If there’s one thing that would put me on the brink of total insanity, it would definitely be signing autographs all [expletive] day long. David."

Nirvana memorabilia is increasingly in demand as Generation X moves into middle age. This is typically the time when people are able to afford artefacts connected with their younger years.

Results are starting to approach prices paid for Beatles memorabilia, which has historically occupied the top of the market. The cardigan Cobain wore in his iconic MTV Unplugged performance made $137,000 at auction in 2015.

John Brennan has been collecting autographs since the 1970s. He’s spent countless hours waiting outside venues and hotels in the hope of capturing that elusive score.

Brennan explained why he’d made the decision to sell off a large part of his collection: “I wanted to share some of the stuff I’ve gotten over the years with other collectors and fans that I know will really appreciate them. I’ve always been a collector first and foremost. I love music, that’s why I chased these things.”

A copy of The Freewheelin’ Bob Dylan signed by the man himself achieved $10,324.

Dylan is well known for being somewhat curmudgeonly and rarely signs when asked. Brennan comments: “He’s tough to get now; all of my autographs and photos were done many years ago. He has a better quality signature now, but it’s more difficult to get.”

Freewheelin’ was Dylan’s second and secured his image as the voice of his generation. The choice of record may well have pushed the price up.