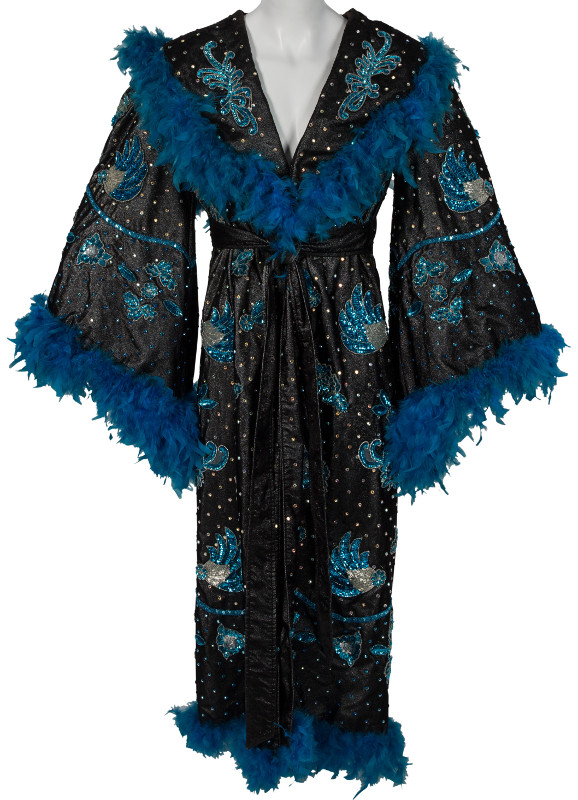 WWE wrestler Ric Flair wore this spectacular robe into the ring before beating young rival Carlito in the 2005 Unforgiven tournament in Oklahoma.
The befeathered blue and black garment is decorated with flowers. On the reverse is Flair’s nickname “Nature Boy”.

He went on to wear it on numerous other ringside appearances, including a tables and chairs match in 2006 and a 2009 bout against Hulk Hogan.

As you might have guessed, Flair is well known for his ludicrously flamboyant ringside style – presenting himself as a super rich international playboy with a penchant for private jets.

Starting out his career in the early 1970s, he gained a reputation as a consummate showman and is today regarded as one of the greatest wrestlers of all time.

Most of his robes were handmade by costume designer Olivia Walker and cost around $10,000 apiece.

Flair has included a note on the robe in his own inimitable style: "I’m a limousine ridin, jet flying, kiss stealin, wheelin dealin son of a gun, Wooooo!

The piece is offered with a reserve of $24,000 in Heritage Auctions’ much anticipated February 25-26 Platinum Night Sports Collectibles sale in Dallas.

Other examples of Flair’s distinctive outfits have sold for similar sums in the past, with one from 2000-2003 achieving $26,400 last year.

Or as Flair would put it: “Wooooo!”