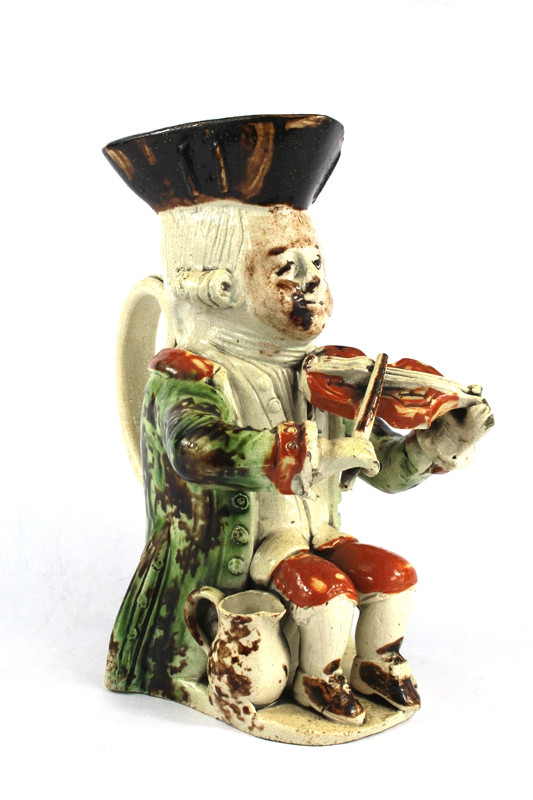 A rare Toby jug realised £9,680 ($13,527) in an auction at Martin & Pole in Wokingham, UK last week.
The piece features a bewigged sailor playing a violin and is extremely rare.

Matthew Coles told local paper the Bracknell News: “I saw the jug and thought this must be of some age. It looked like early Staffordshire ware, dating to the late 18th/early 19th century, but was a little wary because I knew that some of this ware is copied.

“What particularly drew me was that it was not the usual portly gentleman holding a tankard or jug but a figure of a man playing a violin. We could not find any details of similar jugs being sold, until we learned that the jug depicts a midshipman playing a fiddle, and are known as ‘Midshipmite’ Toby jugs. The last one we could find sold was at Christie’s in 2013, so they are particularly rare.”

That other jug, which displays a drunken soldier brandishing a sword, sold for £11,250 ($15,776). The difference in price could be down to condition. The present example has lost a fair portion of its original paint.

Toby jugs were first made by Staffordshire ceramics dynasty Royal Doulton in the mid-1700s.

They tend to feature a cheery, tricorn hat-wearing figure that has clearly imbibed too much, and were typically used in alehouses. Seeing as they’re typically big enough to hold around two pints, you wouldn’t need to fill it often to start to resemble it.