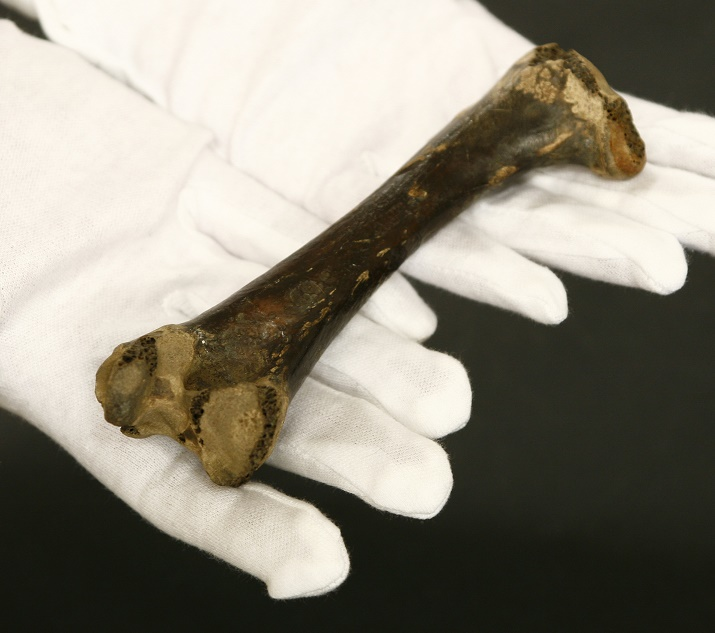 A bone from the legendary extinct Dodo bird is set to go under the hammer next month.

The bone is believed to be only the third specimen of its kind to appear at auction in the past 84 years.

Dodo bones can be found in several museums around the world, but only a handful remain in private ownership – making the sale a unique opportunity to pick up a true piece of natural history.

The Dodo was a 3ft tall flightless bird, which lived on the uninhabited island of Mauritius in the Indian Ocean.

The bird had evolved with no natural predators, and so when it was first discovered by Dutch sailors in the late 16th century it showed no fear of humans.

Sadly for the Dodo, this lack of fear was its downfall – along with the fact that it was apparently delicious – and within 70 years it had been hunted to extinction.

For centuries after, many refused to believe it had existed at all, and it became an almost mythical creature recorded only in sketches and the diaries of half-starved seamen.

However, in the mid-19th century large numbers of Dodo bones were discovered in Mauritius’ Mare aux Songes swamp, finally proving its existence.

But the bird truly captured the public’s attention in 1865, when it appeared in Lewis Carroll’s book Alice in Wonderland, and today it remains an iconic symbol of all threatened species.

“In terms of importance and rarity, the dodo is one of the great icons of extinction,” said consigner Errol Fuller, an author and expert on extinct species.

“Perhaps not as important as a Tyrannosaurus Rex, but more so than anything else, little is known about it and only a few images survive – mostly 17th century Dutch paintings.”

Today the only known soft tissue remains of a Dodo are a dried head and foot, owned by the Oxford University Museum of Natural History.

The only complete, original Dodo skeleton is on display at the museum of Port Louis in Mauritius.