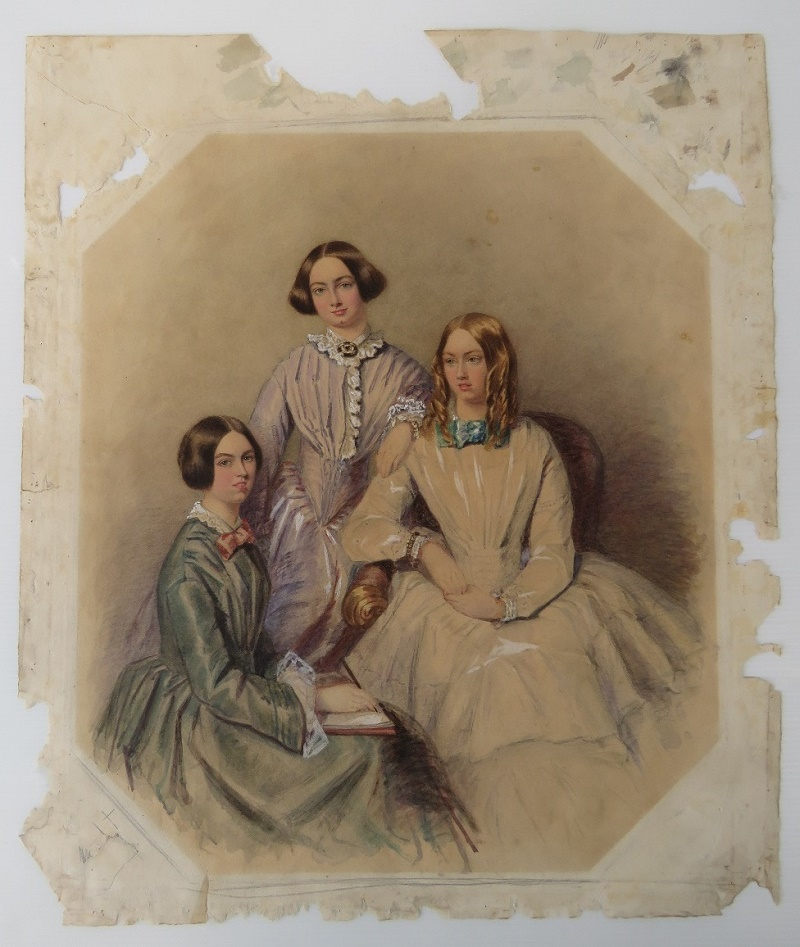 A painting believed to be a previously unknown portrait of the Brontë sisters is up for sale in the UK, after it was acquired by accident in an auction-house mix up.
The watercolour painting, dated circa 1838, features three women believed to be Charlotte, Emily & Anne Brontë, regarded as three of the most important female authors in literary history.

According to reports, the painting was acquired years ago when a collector purchased another painting from an unnamed auction house.

When that artwork could not be found, the consignor was offered this portrait instead, and accepted it without suspecting its historical importance.

It was later consigned to auction in 2012, before auctioneer Jonathan Humbert withdrew it from the sale, believing it deserved more research.

The portrait is only the second group painting of the sisters known to exist. The other, painted by their brother Patrick Branwell Brontë, is owned by the National Portrait Gallery in London.

The painting is thought to be the work of Edwin Landseer (1802-1873), an English painter renowned primarily for his portraits of animals.

Landseer was one of Queen Victoria’s favourite artists, and was responsible for designing the famous bronze lion statues which reside in Trafalgar Square.

The painting is said to include telltale features which identify the women as the Brontës.

First is the sofa on which two of the figures are resting: a horse-hair sofa with carved swirl and beaded-curve back, which is thought to be the sofa on which Emily Brontë died in 1848, and which still resides at the Bronte Parsonage Museum.

Second are items of jewelry worn in the portrait, which closely resemble pieces still held in the museum’s collection.

And thirdly, the wall behind the figures is an unusual colour, which matches a description by Charlotte’s close schoolfriend Ellen Nussey in her 1871 book Reminiscences: "not papered, but stained in a pretty dove-coloured tint".

According to Humbert, "this painting is a bridge between the literary and art worlds and is indeed a painting of national importance."