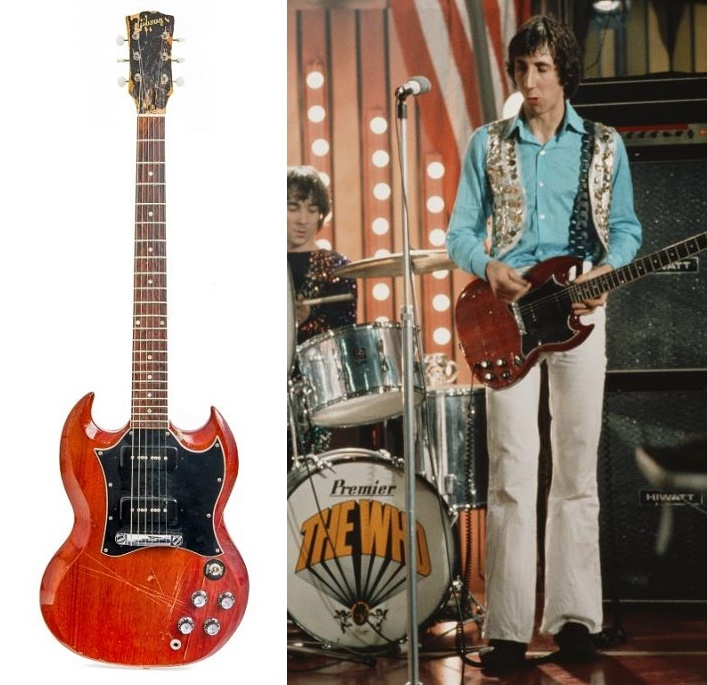 A vintage guitar played by Pete Townshend during some of The Who’s most famous performances is up for sale this month.

The guitar was one of many damaged on the road by Townshend, and later stored in the basement of his home in London. In a letter accompanying the guitar, he notes:

“I have no idea where or when I played it, but it is certainly one I used on the road in the UK; otherwise it would not have made it into the cellar in my house – so possibly on Live at Leeds and the Tommy recordings. … I feel sure that my neck repair will last longer than I will.”

The guitar is believed to be the one played by Townshend during the Who’s performance on The Rolling Stones Rock and Roll Circus – a TV special filmed in 1968, which never made it to air.

The Stones had conceived the idea for the show, featuring performances by artists such as Taj Mahal, Marianne Faithfull, and Jethro Tull, along with special appearances by the likes of John Lennon, Yoko Ono and Eric Clapton.

But filming was beset by problems, and took far longer than expected, so by the time The Stones took to the stage it was 5 A.M.

They were exhausted, the invited crowd was inebriated, and the performance was more of a damp squib than an explosive finale.

It also marked Brian Jones’ final public performance with the band, and the majority of his playing remained inaudible throughout the show.

It didn’t help that, hours earlier, The Who had delivered a blistering of ‘A Quick One, While He’s Away’, which blew everyone else out of the water.

Mick Jagger as so disappointed that he cancelled the airing of the show, and Pete Townshend later recalled:

“When [The Stones]really get moving, there is a kind of white magic that starts to replace the black magic, and everything starts to really fly. That didn’t happen on this occasion; there’s no question about that.

“They weren’t just usurped by The Who, they were also usurped by Taj Mahal – who was just, as always, extraordinary. They were usurped to some extent by the event itself: the crowd by the time the Stones went on were radically festive.”

The show remained ‘lost’ for years, until it was finally released on DVD in 1996.

Elsewhere, the Julien’s sale offers a treasure trove of guitars for music fans to bid on.