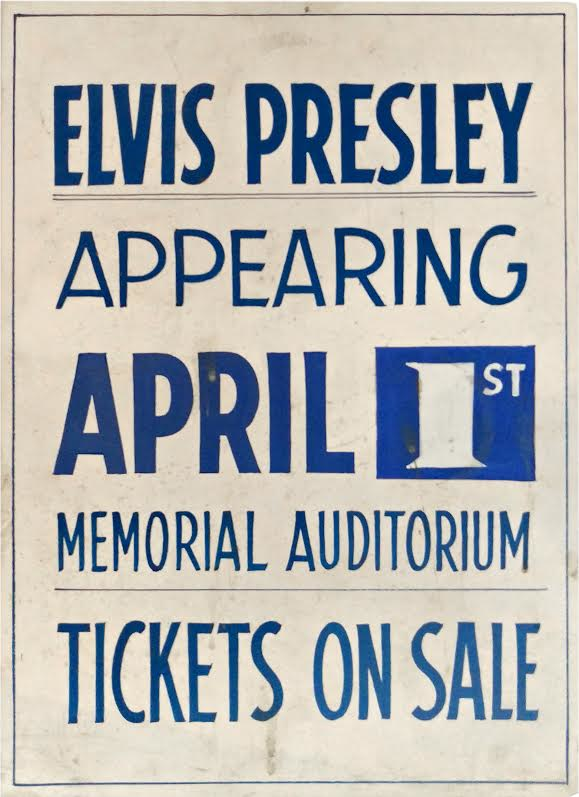 A collection of vintage music posters ranging from Elvis Presley to punk is up for sale with Paddle8.
The online auction company is currently hosting its ‘Legendary’ sale, with historic memorabilia spanning 70 years of popular music, and amongst the most notable lots are a series of rare posters advertising shows by some of the biggest names in rock and roll.

The earliest poster dates back to April 1, 1957, for an appearance at the Memorial Auditorium in Buffalo by the King himself, Elvis Presley.

By the time Elvis hit the road that year he was a national sensation, with several number one records and hit movies under his belt. His shows were so packed with screaming fans that one newspaper reported "the trouble with going to see Elvis Presley is that you’re liable to get killed."

The hand-painted box office poster is believed to be the only authentic example from the Buffalo show, and is estimated at $10,000-$15,000.

Next up is a poster promoting Bob Dylan’s ‘Halloween Concert’ at the New York Philharmonic Hall on October 31st, 1964.

The show captured Dylan in between two worlds, as he moved away from the political folk movement towards popular rock and roll – a journey which would earn him the name ‘Judas’, and ultimately change the face of music.

With just a handful of examples from the pivotal show in existence, this highly sought-after poster is expected to sell for $15,000-$20,000.

Two years later in San Francisco, The Beatles made the final appearance of their third U.S tour at Candlestick Park. Nobody (apart from perhaps the band themselves) suspected it would be the last official concert they ever played.

This rare poster for that show on August 29, 1966, created by the “father of the rock concert poster” Wes Wilson, is the only psychedelic Beatles gig poster ever produced and comes with an estimate of $6,000-$8,000.

By February 1968 things had gotten truly freaky, and this iconic ‘Flying Eyeball’ poster was produced to advertise a series of Jimi Hendrix performances at the two most iconic venues in San Francisco – the Fillmore Auditorium and the Winterland Ballroom.

With artwork by leading underground artist Rick Griffin, this poster is described as "unquestionably the most sought after of the Bill Graham Fillmore series", and is estimated at $10,000-$15,000.

In typically punk rock fashion, the final poster is for a show that never actually took place. In the winter of 1976 The Sex Pistols were due to hit the road for their Anarchy UK Tour, supported by the remarkable line-up of The Clash, The Damned, and Johnny Thunders and the Heartbreakers.

However, thanks to the band’s sweary appearance on the ‘Today’ programme and their refusal to audition in front of the Derby City Council, the show was ultimately cancelled, along with many other around the UK as their reputation preceded them.

Bidding in the Paddle8 sale ends on June 7.