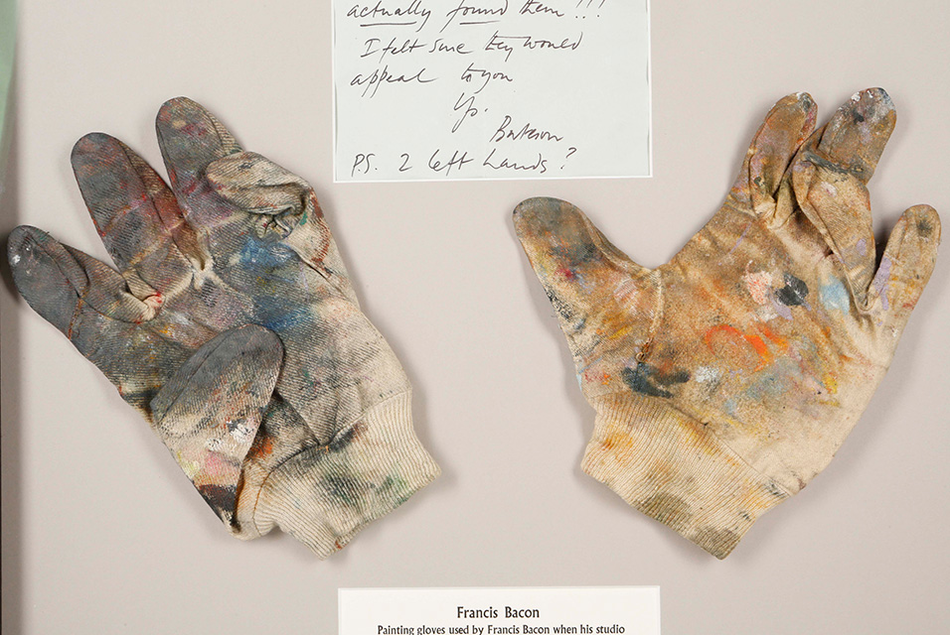 A pair of Francis Bacon’s paint-smeared gloves, worn as he painted one of his most famous masterpieces, will be offered for sale at Chiswick Auctions next week.
The paint-smeared gloves were worn by Bacon in 1969, whilst painting the portrait of his fellow artist ‘Three Studies of Lucian Freud’.

The triptych became the world’s most valuable artwork in November 2013, when it sold at Christie’s to Elaine Wynn, co-founder of the Wynn Casino in Las Vegas, for $142 million.

Bacon executed the painting whilst renting a studio at the Royal College of Art, after his own famously squalid studio went up in flames. During his year-long stay Bacon became "a grumpy college mascot", and in lieu of rent presented the RCA with the work ‘Man Turning on the Light’, which was sold in 2007 for £8.1 million to benefit a new campus for the students.

After he had vacated the studio, the gloves were discovered by Bateson Mason (1910-1977), a painter and teacher at the Royal College of Art from 1932-1935.
Mason later gifted the gloves to a friend, along with the accompanying note:

"Wednesday. John Souvenir !! These Really ARE Francis Bacon’s Painting Gloves! He finished working at our place this morning and amongst the rubbish I actually found them!!! I felt sure they would appeal to you. Yrs. P.S. 2 left hands?"

Bacon was right-handed, but wore two left-handed gloves as he worked, wiping the excess paint onto his left hand.

As an artefact from one of the 20th century’s greatest artists, and with a direct link to one of the world’s most valuable artworks, the gloves are expected to sell for $7,300-$10,230.

"It is always thrilling to witness any tangible links to the great artists of our time and this is no exception," said Jan Leman, the specialist in charge of the sale.

"We have already seen great interest from art collectors and museums around the globe, who are keen to attain a keepsake and personal insight into one of the most celebrated British artists of our time."