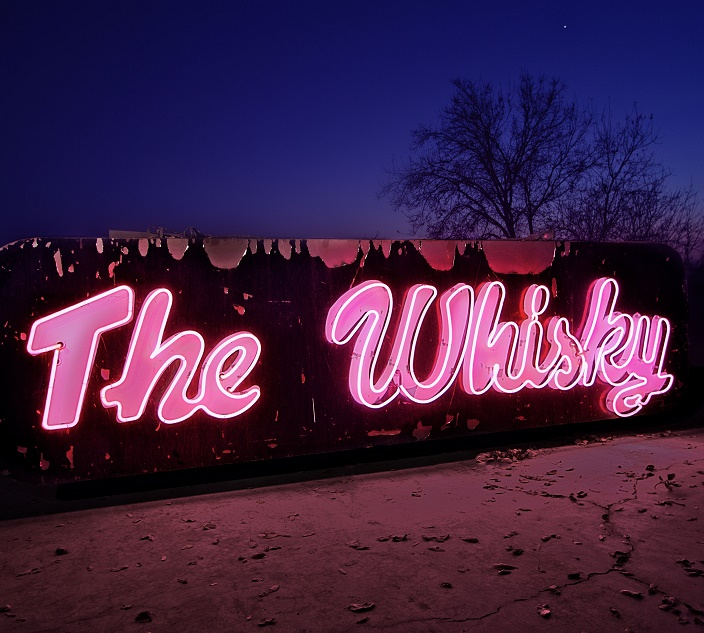 An original sign from the Whisky A Go Go, one of the world’s most iconic music venues, is up for sale this week.
The gigantic pink neon sign is set to hit the auction block in Maine with the Saco River Auctions company.

The Whisky A Go Go was part of a small chain of U.S venues, all named after the famous Parisian nightclub which became the world’s first discotheque when it opened in 1948.

The club opened its doors on Los Angeles’ iconic Sunset Strip in January 1964, and quickly became the epicentre for the rock and roll scene in Southern California.

Bands including The Byrds, Buffalo Springfield, Smokestack Lightnin’, The Mothers of Invention and Love all played at the venue, and it also saw the birth of the national Go-Go dancing craze, as female dancers performed in glass booths above the dance floor.

Perhaps most famously, the club played host to early gigs by The Doors, and later hired them as the house band. The club saw several riotous performances by the group, and their residency lasted until August 1966, when Jim Morrison decided to add some explicit new lines to ‘The End’ and they were fired on the spot.

By the mid-1970s the club was under threat, overtaken b y newer, hipper venues across L.A; but new owners reinvented the Whisky as the home of Punk and New Wave, as groups including The Runaways, Blondie, The Ramones and The Germs helped save the club from obscurity and financial ruin.

The huge pink neon sign offered for sale stood above the venue’s doors throughout the 1980s and 90s, when it was known simply as ‘The Whisky’.

During the 80s, the venue played host to early gigs by hard rock and hair metal bands such as Guns ‘n’ Roses, Van Halen, Motley Crue and Metallica, followed in the 90s by grunge bands such as Soundgarden, Mudhoney and The Melvins.

In 2006, the club’s status as a historic musical landmark was cemented, when it became the first venue to be inducted into the Rock and Roll Hall of Fame.