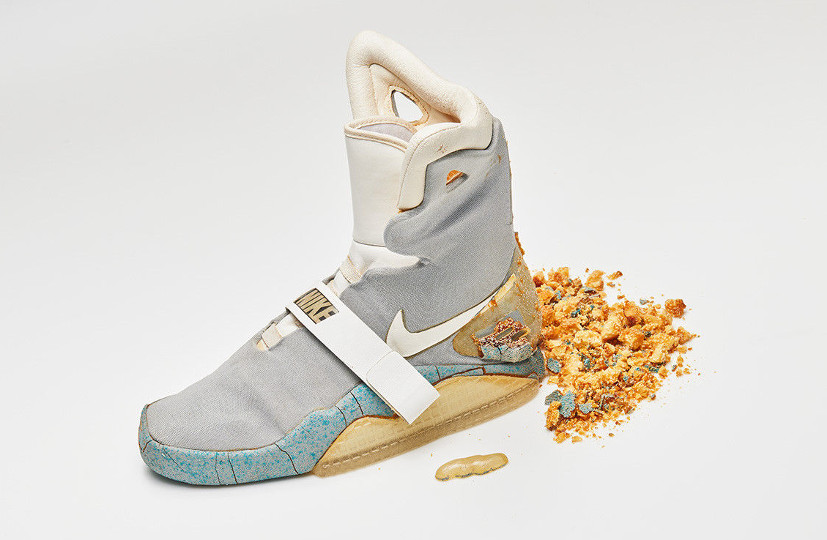 These original Nike Air Mags sold in spite of their condition (Image: eBay)

One of the original self-lacing Nike Air Mags, potentially worn by Marty McFly (Michael J Fox) in Back to the Future II, made $92,000 in an eBay auction on July 2.

That’s despite the lot being in poor condition. Parts of the shoe are visibly falling apart, with the back heel in a particularly bad way. The various scraps that had fallen off it were included in a pair of plastic boxes accompanying the lot. So it’s no wonder it was only made available for local pickup (we can probably assume the buyer to be somewhat local to the Portland, Orgeon area).

The listing described the shoe as originating “from the collection of a longtime Nike employee”. While it was definitely made for the movie, it’s unclear whether it received any screen time or whether Fox even wore it.

The Air Mag is among the most iconic pieces of screen footwear, entrancing generations of teenagers with its light up soles and self-lacing abilities. In reality, the on screen version did not have the latter function.

Designer Tinker Hatfield had worked out the mechanism, but it was still in its early stages. Fox had to wear a massive battery pack and the system kept failing. Instead the production went old school, with stage hands pulling on strings to pull the shoes tight.

As with the hoverboard, the demand for a working pair of these iconic shoes has never died down.

In 2016, Nike finally made 89 official versions of the Air Mag that could perform all the functions seen on screen. It was released to raise funds for the Michael J Fox Foundation and proved an instant sell-out, with specimens changing hands for as much as $52,500 since.

No sign of a working hoverboard yet, but it can’t be much longer now.