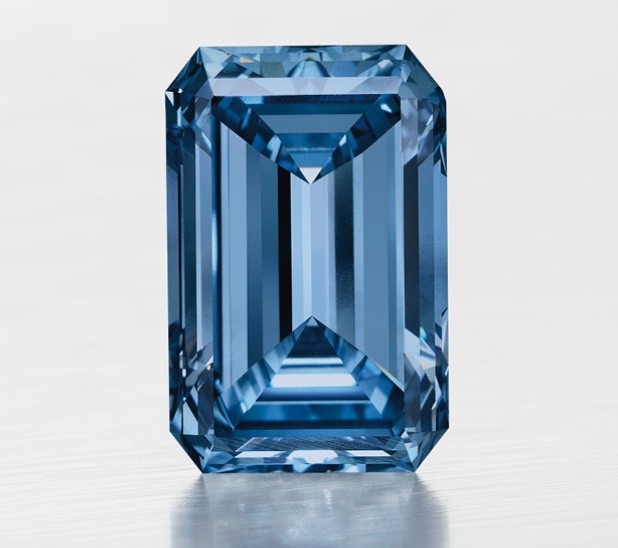 An enormous diamond known as the ‘Oppenheimer Blue’ has smashed a world record at Christie’s in Geneva.
Weighing 14.62 carats, the Fancy Vivid Blue diamond was the largest of its kind ever offered at auction. It had originally been owned by Sir Philip Oppenheimer, former controller of the Diamond Syndicate in London and a major figure in the history of the international diamond industry.

With interest from major collectors around the world, bidding on the jewel lasted a whole 25 minutes before it achieved an incredible final price of $57,541,779, a new world record for any jewel sold at auction.

The auction also featured the jewelry collection of H.S.H. Gabriela Princess zu Leiningen, which achieved a total of $22.5 million with 100% of all pieces sold, led by the Pohl Diamond, a 36.09 carat diamond ring by Cartier which sold for $4,415,885, and a magnificent sapphire and diamond necklace which sold for $3,325,493.

"Once again, the Magnificent jewels sale was a great success welcoming clients from all over the world," said Rahul Kadakia, International Head of Christie’s Jewellery Department.

"Selling the Oppenheimer blue diamond was a real priviledge and the result of $57.54 million proves that there is still a strong demand for high end quality stones. Provenance is also a key element to success as it was the case for The Superb Jewels from the collection of H.S.H Gabriela Princess zu Leiningen which totalled $22.5 million with 100 % of sold lots, highlighted by the Pohl diamond which sold for $4,362,432 (US$120,876 per carat)."