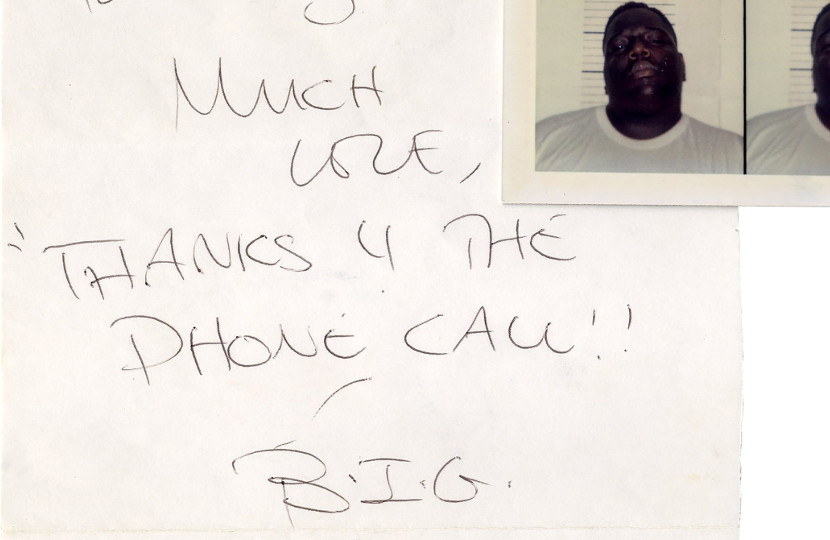 A set of mug shots and a signed note from legendary rapper the Notorious BIG will cross the block at Nate D Sanders on March 29.
The note reads: ”TO: MEGAN / MUCH LOVE, THANKS 4 THE PHONE CALL!! / B.I.G.”

It’s addressed to a young fan named Megan Scanielo. Her older brother worked as a correctional officer at Delaware County Prison, where Biggie was being held for assault and robbery. The officer asked Biggie if he wouldn’t mind giving his sister a call, as she loved his music.

Megan writes in a letter of provenance: “The night that Biggie was arrested, my brother was working…The next day, bored in jail, [Biggie] gave me a call.

Bidding will start at $10,000. Only a handful of autographed pieces connected with Biggie (primarily contracts) have ever come to auction. When they do, they tend to sell for less than $2,000.

This lot has great eye appeal, which is likely to increase the price.

The rest of the sale features a characteristically eclectic selection of items, including a plaid shirt Heath Ledger wore in Brokeback Mountain (2005).

The movie was a watershed moment in the history of queer cinema, becoming the first film with an overtly gay love story to achieve blockbuster success.

In 2006, a pair of shirts worn by stars Heath Ledger and Jake Gylenhaal in the movie sold for a combined $101,100 on eBay. This shirt is unlikely to achieve anything like that figure, although others have sold for around the $15,000 mark since.