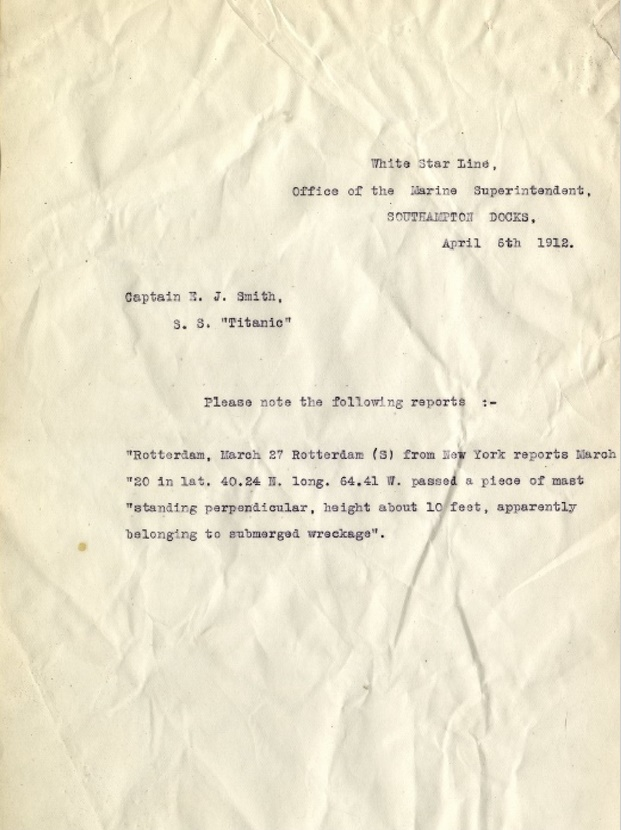 A document which proves the Titanic could have been sunk before it ever reached an iceberg is heading for sale in the U.K.
The previously unknown document was given to the Titanic’s captain Edward Smith, prior to the ship setting sail on its fateful maiden voyage on April 10.

It warned that the wreckage of another vessel had been spotted in the Atlantic by the Rotterdam, a ship of the Holland-America Line, and that Smith should take care to avoid it.
The typed report, which bears evidence of having been screwed up and then flattened out again, reads:

A mast protruding ten feet from the water had the potential to rip a sizeable hole in the ship’s hull, and potentially cause a disaster if the Titanic had sailed straight into it.
The unique report was written by Benjamin Steele, the marine superintendent for the White Star Line at Southampton Docks, and hand-delivered to Smith whilst the ship was still in port.

The document was returned to the Superintendent’s office once the warning was noted, and – following the tragic sinking of the Titanic – ended up in the possession of Hill Dickinson & Co., the White Star Line’s legal firm.

With a national inquiry into the ship’s sinking, and a series of civil liability claims against the company, the White Star Line kept the document to prove it had taken every precaution to ensure the Titanic’s maiden voyage was successful and safe.