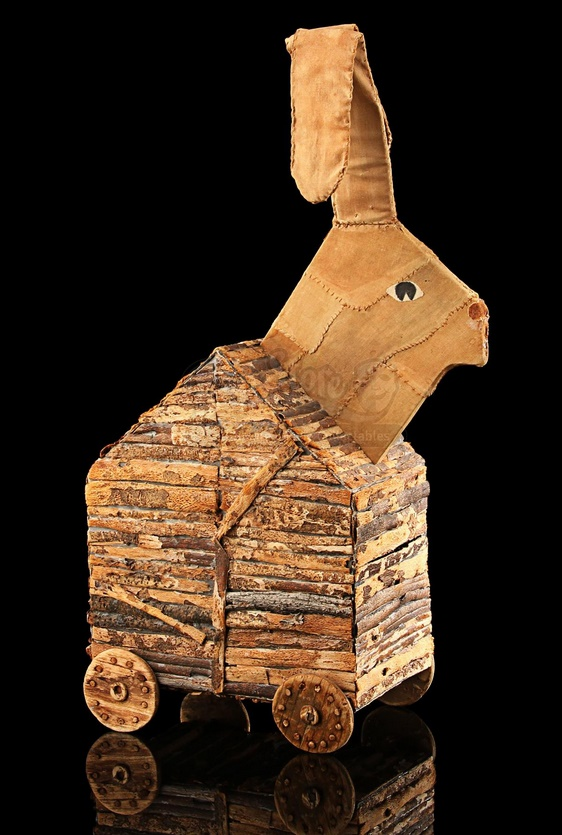 Props and memorabilia from the classic comedy Monty Python and the Holy Grail are up for auction in London this month.
The items come from the collection of Valerie Charlton, a special effects model maker who began her career on the film in 1975.

Charlton then worked with the full Python team again on both Life of Brian and The Meaning of Life, and later went on to work with Terry Jones on his classic children’s film Labyrinth, and with Terry Gilliam on several projects including Time Bandits, Brazil and The Adventures of Baron Munchausen.

Leading the collection is a screen-used production miniature of the Trojan Rabbit, a key prop from the film estimated to sell for up to £10,000 ($13,190).

"Monty Python and the Holy Grail was the first feature film I worked on," says Charlton. "I joined the crew on location in Scotland in the Spring of 1974 to make the figurehead of a mysterious boat designed by Terry Gilliam, which was to transport King Arthur across a loch. I painted many shields and made medieval looking tents and later in the production made my first special effects model, a scale replica of the Trojan Rabbit."

The Trojan Rabbit is used by Arthur and his knights as a way to sneak into a French-occupied castle – but they forget to hide inside it before it’s wheeled inside, and it’s quickly catapulted back to them over the castle walls.

Charlton and her partner Julian Doyle, a cameraman and co-producer of the film, shot the miniature Trojan Rabbit flying through the air by suspending it with a fishing line from their roof in London – a shot which was then intercut with the life-sized version falling from the sky and crushing an unfortunate servant.

Also amongst Charlton’s collection are two helmets worn by dancing Knights of the Round Table, each estimated at up to £600 ($790).

The helmets appear in the film’s famous musical number, which later inspired the hit stage musical Spamalot, and which also inspires King Arthur to turn back, stating "On second thoughts, let’s not go to Camelot. It is a silly place."

Fans will also have the chance to bid on a copy of a Monty Python book inscribed by all six members, a collection of Charlton’s behind-the-scenes production photographs from both Holy Grail and The Meaning of Life, and a replica of the sacred (and explosive) relic, the Holy Hand Grenade of Antioch.