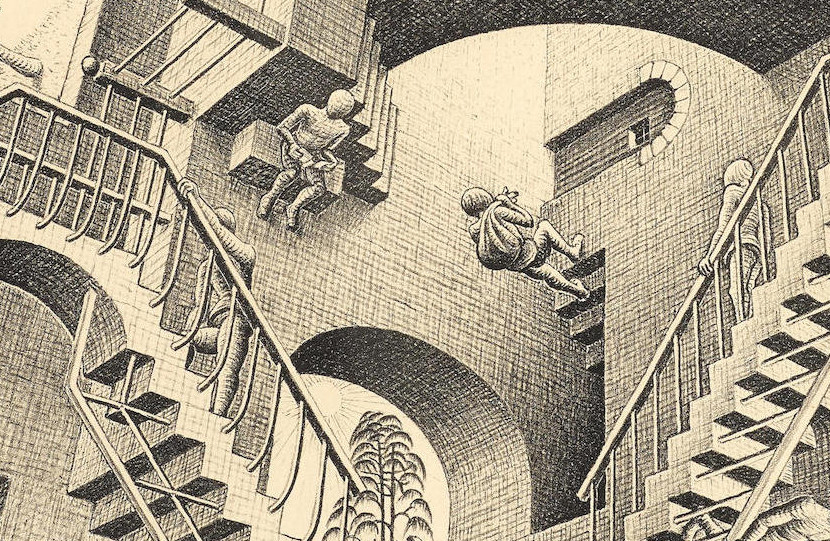 A lithograph print of MC Escher’s Relativity (1953) achieved a new world record for the artist at Bonhams on May 22, with a final result of $92,500.

This is Escher’s most iconic work. It shows a series of staircases at strange angles. They’re peopled by faceless figures who appear unaffected by the normal rules of gravity.

The drawing has been parodied in film and TV, in everything from the Simpsons to classic Italian horror Suspiria. Escher achieves his effect using three point perspective and clever lighting. The eye is drawn around the image in a loop, taking in more details on each pass.

Escher’s complex, tessellating creations were heavily inspired by mathematical ideas. Although his ideas would be explored by the cubists and surrealists in the 20th century, Escher’s work is so “high concept” it’s usually considered to sit outside the artistic pantheon.

Mathematicians and scientists have largely adopted him as one of their own. This was cemented by his inclusion in scientist Douglas Hofstadter’s bestselling 1979 book Gödel, Escher, Bach. Escher’s Sky and Water I was also featured, achieving a final bid of $37,500.

Deborah Ripley, director of prints and multiples at Bonhams New York, said: “We saw strong bidding across the board and we are especially pleased with the exceptional results achieved for both rare prints by Maurits Cornelis Escher, which came from a private collection in the mid-west.

The lot was consigned from the collection of graphic artists Robert and Wilcke Smith, who approached Escher to buy some prints in 1959.

The lot was accompanied by Robert’s original letter, as well as a signed response from Escher naming his price as $20. That’s around $187 in today’s money.

Other highlights included Andy Warhol’s Rebel Without a Cause, a portrait of James Dean from his ads collection, which sold for a solid $125,000.