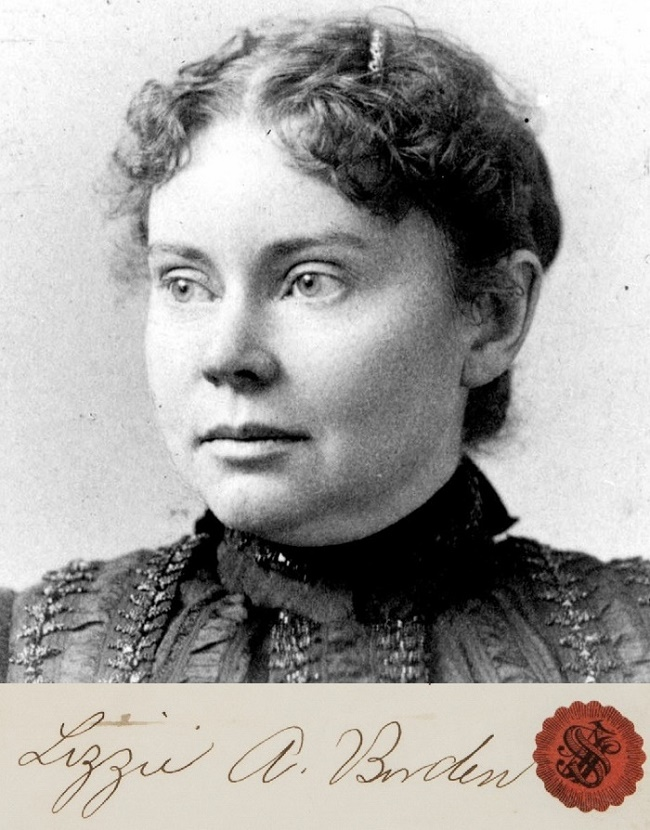 A document signed by the infamous Lizzie Borden sold for $16,250 at Heritage Auctions in Dallas this week.

Borden became notorious in 1892, when her father and step-mother were brutally murdered with an axe at their home in Fall River, Massachusetts.

Andrew Borden’s body was found downstairs on a sofa, having been struck in the face 11 times with a hatchet.

Abby Borden was then discovered upstairs in the guest room, with 18 similar blows to the back of her head.

Lizzie Borden was the main suspect, as she was known to have disliked her step-mother and, along with her sister, had argued with her father over the family money.

She changed the story of her alibi several times during the investigation, and was also spotted burning a dress several days after the killings, which she claimed had been ruined by wet paint.

Following a shoddy police investigation, during which Borden was finally arrested for the murders on August 11 and sent to jail to await trial.

The legal document is dated from the following day, August 12 1892, and grants the power of attorney to her sister, Emma L. Borden.

The document was co-signed by Borden’s lawyer Andrew J. Jennings, and has been consigned to auction for the first time by one of his descendants.

The story of the shocking double-murder caught the public’s imagination, and made headlines across America.

Her trial in June 1893 was a media sensation, and observers were stunned when a jury acquitted her of both murders.

Borden then returned to Fall River, where she used her new inheritance to purchase a large house in a wealthy neighbourhood known as ‘The Hill’.

Although she had been found innocent, most people still suspected she had murdered her parents, and no other suspects were ever named or investigated.

Her infamy gave rise to the sinister skipping rhyme which children sing to this day:

"Lizzie Borden took an axe
And gave her mother forty whacks.
When she saw what she had done,
She gave her father forty-one."

Emma Borden shared the house with her sister until 1905, when she abruptly moved out and never contacted her again.

Lizzie – now calling herself Lizbeth – remained in Fall River for the rest of her life, and passed away in 1927 at the age of 66.

She left the majority of her fortune – the equivalent of over half a million dollars today – to the town’s Animal Rescue League.

Today the Borden house operates as a Bed and Breakfast, and is a highly popular tourist destination.

It is also rumoured to be haunted by the ghosts of Andrew and Abby Borden, and has been the subject of numerous TV paranormal investigations in recent years.

Borden’s life, and her alleged role in the brutal slaying of her parents, has since inspired numerous TV shows, films, books and even stage musicals.