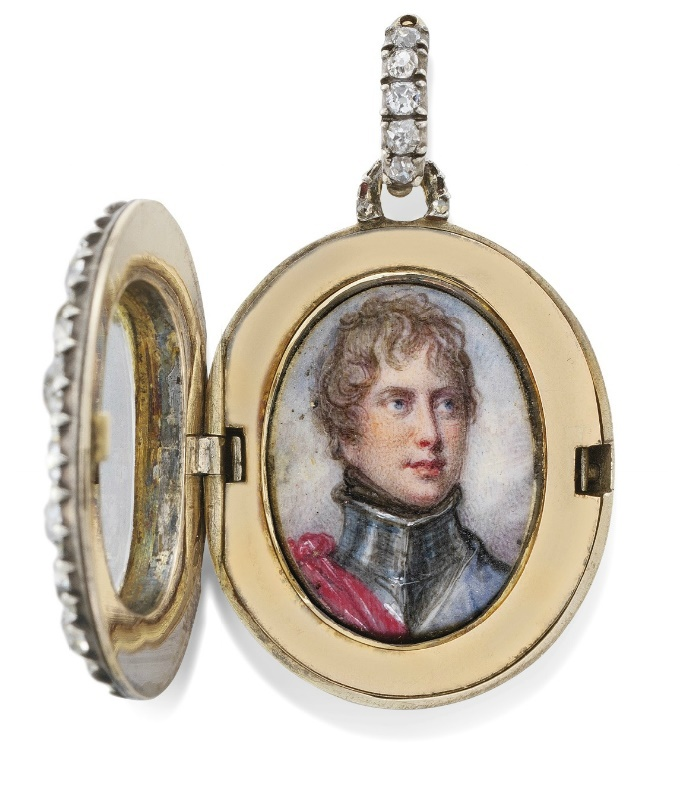 A locket which tells the story of King George IV’s secret forbidden marriage is up for sale at Christie’s next month.
The diamond locket is known as the ‘Maria Fitzherbert Jewel’, after the woman George privately described as "the wife of my heart and soul".

This remarkable piece of intriguing royal history is expected to sell for $100,000 – $150,000, as part of the Christie’s Exceptional Sale in London on July 6.

The locket was originally part of a matching pair, bearing portraits of the couple by the celebrated court miniaturist painter Richard Cosway.

According to several accounts, upon his deathbed in 1830 George asked to be buried with the locket containing Fitzherbert’s portrait around his neck, as a symbol of his love for her.

The locket offered at Christie’s is believed to be the corresponding piece, bearing George’s portrait, which Fitzherbert later passed down to her adopted daughter Minney Seymour.

George, then Prince of Wales, met first Fitzherbert in 1784 and became instantly infatuated with her.

However, her Roman Catholicism and lack of royal lineage meant he was forbidden from marrying her – at least, not publically.

Any marriage would have to be approved by King George III and the Privy Council, but the Prince’s love for Fitzherbert was so strong that he ignored all warnings and conducted a ceremony in secret in 1785.

But by 1795, the extravagant Prince had racked up debts worth £600,000 – tens of millions in today’s money – and he was pressured into a deal by the English Parliament.

They would pay his debts if he married his cousin, Princess Caroline of Brunswick, in an effort to secure an heir and legitimate successor for the House of Hanover.

It was a marriage of convenience, and although it did indeed produce an heir, Princess Charlotte, the pair soon separated. The Prince then returned to Maria Fitzherbert, and they shared several happy years together living at the Royal Pavilion in Brighton.

In 1811 George became the Prince Regent, as his father George III descended into madness, and his relationship with Fitzherbert began to fade. He sought comfort with a number of younger mistresses, and she dedicated herself to Seymour, the orphaned daughter of two close friends.

George became King in 1820 and reigned for 10 years, but his heavy drinking and over-eating took its toll.

At the time of his death in 1830 he weighed more than 20 stone, and was described as looking like "a great sausage stuffed into the covering".

But despite his wildly indulgent lifestyle, his many mistresses and alleged illegitimate children, for George there was only one woman who ever owned his heart.

He was laid to rest in St George’s Chapel, Windsor Castle, and remains there to this day – with a portrait of Maria Fitzherbert alongside him for all eternity.