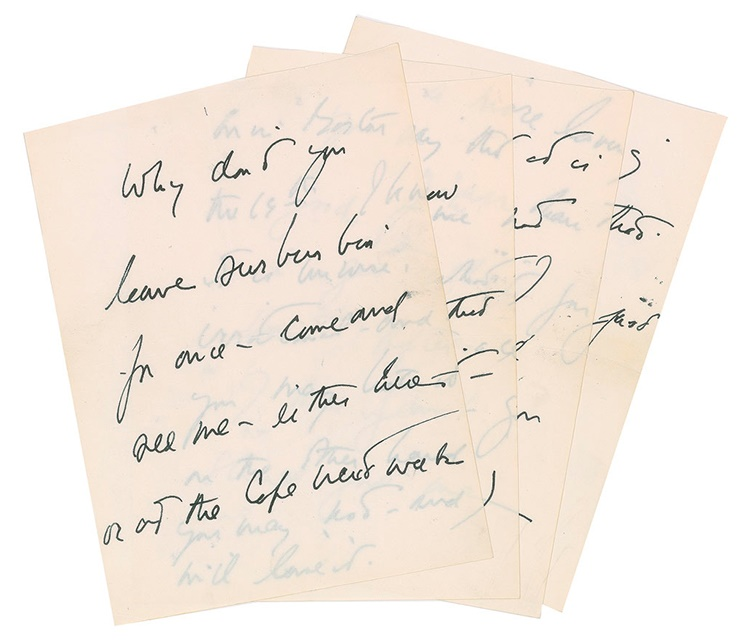 A love letter written by John F. Kennedy to one of his alleged mistresses has sold at auction in Boston for $88,970.

The letter was intended for Mary Pinchot Meyer, a family friend and wife of a high-ranking CIA agent with whom JFK reportedly had a long secret affair.

Insiders claim the pair met around 30 times over the years, and even smoked pot together in a White House bedroom.

The four page letter, which was written just weeks before Kennedy was assassinated in Dallas in November 1963, reads in part:

“Why don’t you leave suburbia for once — come and see me — either here — or at the Cape next week or in Boston the 19th. I know it is unwise, irrational, and that you may hate it — on the other hand you may not — and I will love it.”

Despite being written to arrange a secret rendezvous, the letter was never sent to Meyer and remained in the personal collection of his long-time personal secretary Evelyn Lincoln.

She had sensibly clipped the top of the letter to remove the official White House stationary marks, but the faded presidential seal watermarks remained faintly visible on the pages.

The story took an even more tragic and intriguing turn less than a year later, when Meyer herself was found shot dead on a canal path in Washington in October 1964.

Her murder, which remains unsolved to this day, came soon after the release of the Warren Commission Report into Kennedy’s assassination.

It was later revealed that Meyer’s diary, which contained details of her affair with JFK, had been acquired and covered up by the CIA, and some believe she was killed as part of the conspiracy to cover up the truth behind Kennedy’s assassination.

“It’s an incredibly revealing Kennedy letter that is written in such a casual and very informal manner — not something that you would expect to see from a president,” said Robert Livingston, Executive VP at RR Auction.