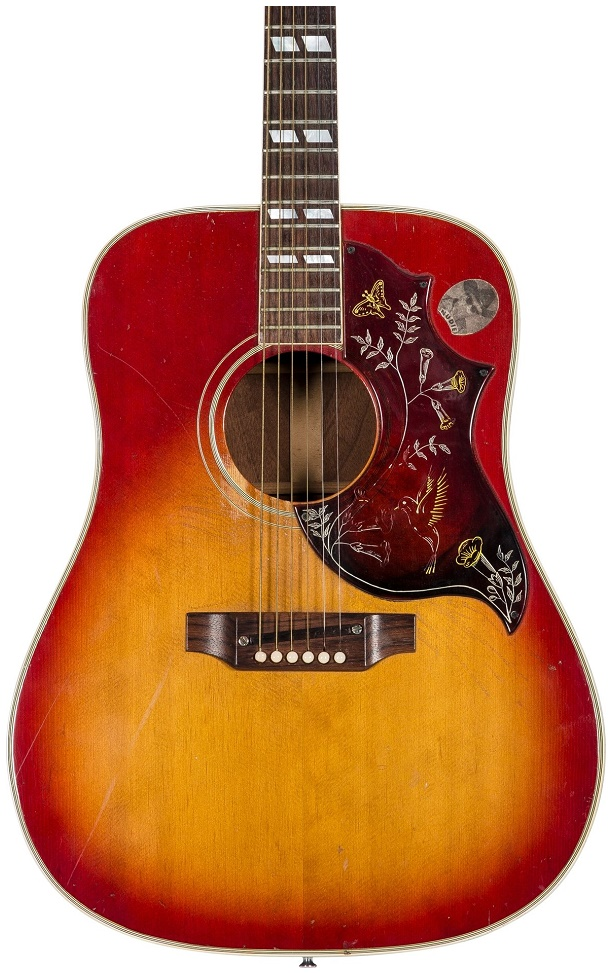 The guitar used by Janis Joplin to record her classic song ‘Me and Bobby McGee’ will lead an upcoming sale of entertainment and music memorabilia at Heritage Auctions.

Joplin used the 1969 Gibson Hummingbird acoustic guitar on her definitive version of the song, originally written by Kris Kristofferson and Fred Foster. Joplin recorded the song just days before her death in October 1970, at the age of just 27, and it posthumously reached #1 in the U.S singles chart.

Since Joplin’s tragic death, the guitar has been owned Sam Andrew, founding member of her two bands, Big Brother and the Holding Company and the Kozmic Blues Band.

Having been displayed for years at the Musical Instrument Museum in Scottsdale, Arizona, the guitar will now be auctioned along with its original hard case, and is expected to fetch more than $40,000.

Another equally special guitar up for sale is a prototype Schecter Diamond series Cloud guitar played by Prince. Finished in cobalt blue, and shaped in the iconic ‘Cloud’ design, the guitar also featured in a tribute to the late star by Sheila E. At the 2016 BET Awards, and comes with an estimate of $25,000+.

For Beatles fans, there’s an array of treasure from rare records to personal memorabilia. Notable lots include a rare copy of their first 45 single ‘P.S. I Love You/Love Me Do’, signed by the Fab Four and estimated at $40,000+; a sealed state copy of the band’s infamous ‘Butcher Cover’ album, valued at $30,000+; and a lock of John Lennon’s hair, originally obtained by a German competition winner in 1966, estimated at $5,000+.

Another item first owned by a lucky competition winner is a pair of aviator sunglasses worn on-stage by Michael Jackson in 1984, during The Jacksons’ Victory Tour. Originally presented to a fan by the Los Angeles Daily News, the glasses will now be sold with an estimate of $8,000+.

“This is an extraordinary collection of items that has enormous appeal to collectors and music lovers around the world,” Heritage Auctions Director of Entertainment Margaret Barrett said.

“Not only were Janis Joplin, John Lennon and Michael Jackson iconic musicians who transcended the music world, but they also had their lives cut short, thereby making these items part of finite sets. These artists will be known around the world for generations to come, making these items of extraordinary value to collectors.”