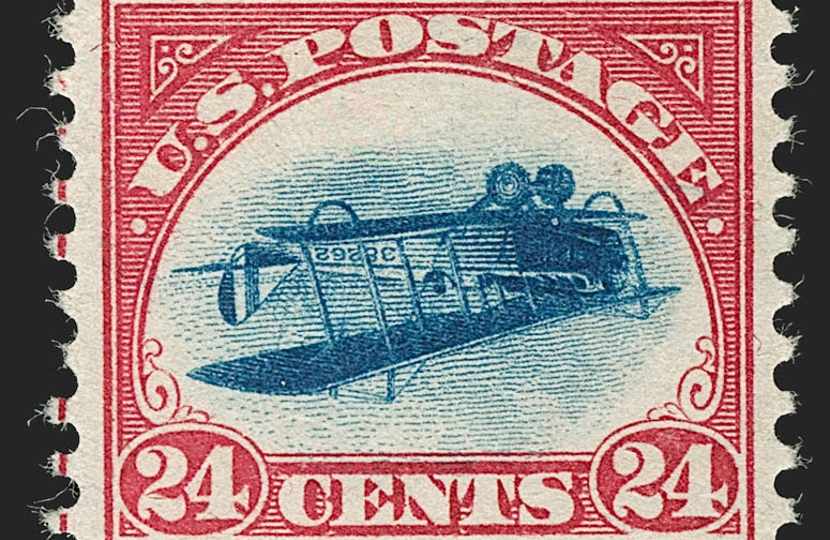 A rare Inverted Jenny, the most coveted of all American stamp errors, is heading to auction at Robert A Siegel.
The lot will lead the David Wingate Collection of United States Stamps on April 11-12 in New York with a valuation of around $450,000.
Only one single sheet of this 1918 24c issue has ever been recorded. It was spotted by stamp dealer William T Robey in a Washington, DC post office on May 14, 1918, the same day the issue was released to the public.

This was not a totally serendipitous find. The stamps were fresh in and Robey, like thousands of stamp dealers across the country, had gone out that day specifically hoping to find inverts.

After managing to secure the sheet, Robey sold it on to collector Colonel HR Green for $20,000.

Green then split it up into individual pieces (and a very small number of blocks) and sold them on to collectors.

This present specimen is position number 86 from that original sheet. It’s among the finest survivors on the market, beautifully centred with only some very minor mount glazing to detract from its otherwise excellent appearance.

It’s the first time it has been offered for sale since 1999, when it made $143,000 at Siegel. That it’s valued at more than three times that figure 20 years on indicates the rude health of the market for Inverted Jennys.

The record for a single Jenny is $1.1m, set for a truly exceptional "xf-superb 95" rated specimen belonging to the late dealer Irwin Weinberg.