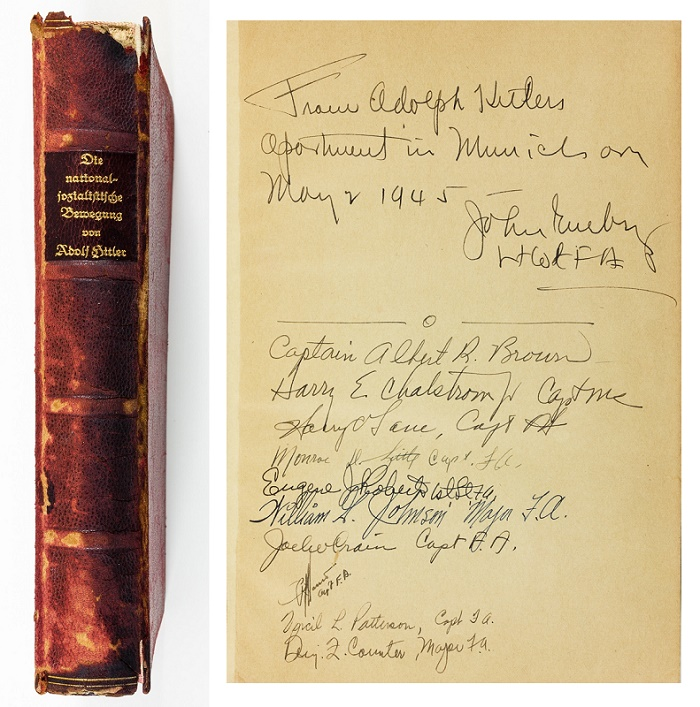 Hitler’s personal copy of Mein Kampf is set to cross the auction block as part of a sale featuring WWII and political memorabilia.
The Alexander Historical Auctions sale will offer the book, discovered in Hitler’s Munich apartment by American military officers during the final days of the war.

Adolf Hitler wrote Mein Kampf, featuring his political and ideological vision for the future of Germany, in 1924 whilst serving a prison sentence for his role in a failed coup.

The book on offer is a rare copy of the second volume of the work, published in Munich in 1927, which was never available to the general public. Hitler retained this copy for years, and it remained in his personal library long after his rise to power and subsequent downfall.

The book bears the signatures of eleven U.S officers from a field artillery battalion of the 45th Infantry Division, who were amongst the first to enter the Führer’s personal apartment on May 2, 1945 following his suicide on April 30.

It also includes a letter from the daughter of Capt. Daniel B. Allen of the 45th Infantry Division, who brought the book home with him as a souvenir following the end of the war. Offered with solid provenance, this relic from one of history’s most notorious figures comes with an estimate of $12,000-$15,000.

The book isn’t the only one of Hitler’s personal artefacts on offer to collectors of historic memorabilia. The sale will also include etched drinking glasses, engraved table silver, books from Hitler’s library at the chancellery in Berlin and a selection of signed documents and photographs.

Elsewhere the sale will feature items seized from U-249, the first German submarine to surrender directly to the Allies at the end of the war, and a collection of important U-Boat items being de-accessed by the non-profit War Museum of New York. 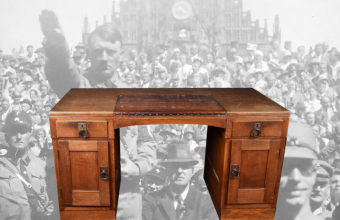