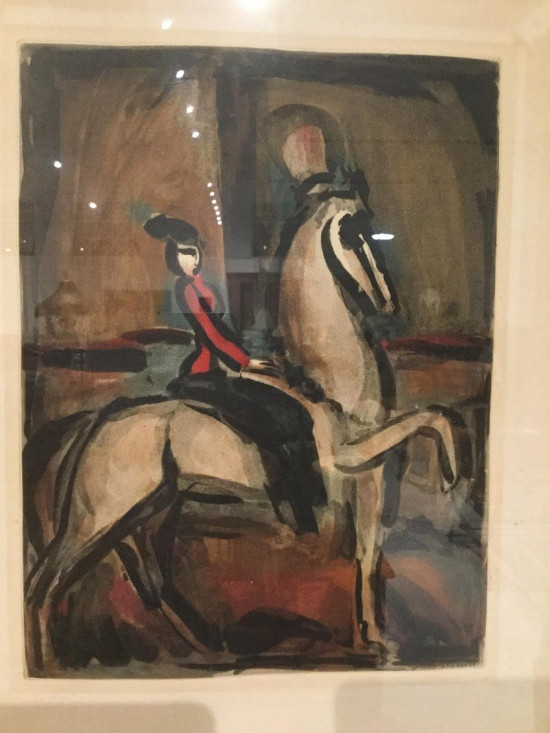 A colour aquatint by fauvist painter George Rouault is up for auction at Millea Bros in Boonton, New Jersey with an estimate of $400-600.
The work originates from the artist’s Le Cirque series, which depicts clowns and other circus performers, and shows a woman riding a horse.

Rouault came under the influence of fauvism (often seen as a pre-cursor to expressionism) in the 1890s, after meeting and befriending Henri Matisse – one of the movement’s unoffical leaders.

Aquatints by Rouault come to auction fairly often and are popular with buyers. In the past some have sold for close to $2,000 – with one (titled Homme Conduisant Un Autre) selling for $1,659 at Skinner in 2008.

Aquatint is a method of printing using copper plates. Notable enthusiasts have include Francisco Goya and David Hockney. &nbsp;

The work has exceptional provenance, having formerly been part of the collection of former Seagrams chief executive Edgar M Bronfman.

Original works by Rouault are popular with collectors, with one work from his Cirque series selling for $314,500.

There are a wealth of other fascinating pieces in the sale, not least an oil painting by 1930s fashion illustrator EM Bickford.

Not much is known about Bickford, who spent much of his or her career at the B Forman Co department store in Rochester, NJ.

The present lot was likely painted as a piece for advertising for the store’s in house range. It’s a fascinating piece of Americana, particularly as the store itself is no more. &nbsp;&nbsp;

The sale will feature everything from art to furniture and is due to take place on February 16.