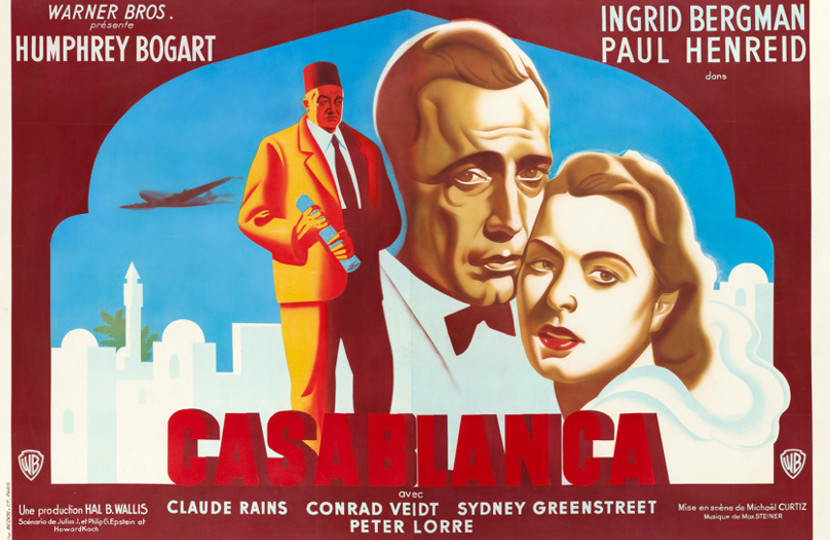 A rare French post-war "double grande" size poster for classic movie Casablanca could make $60,000-120,000 at Heritage Auctions.
Several posters for the movie were produced in France but this example by artist Hervé Morvan, best known for his cheery advertising work, was the first to be released.

The heavily stylised design is at odds with the straight realism of movie posters at the time. Stars Humphrey Bogart and Ingrid Bergman are painted in an almost cartoonish style, with bright and bold colours making up the background.

Last year a one of a kind Italian poster for Casablanca sold for $478,000 at Heritage Auctions, becoming the joint-second most valuable movie poster ever sold.

The present specimen is one of three, hence the lower estimate, but is of an equally high quality.

An original Japanese tatekan (upright) poster for Akira Kurosawa’s 1954 masterpiece Seven Samurai is also featured at the April 7 auction, with a valuation of $20,000-50,000.

This is the only example of this particular design known to exist. It features stunning depictions of the movie’s main characters alongside a series of action scenes.

Seven Samurai is one of the most influential movies of all time. It was most famously remade in the US as cowboy movie The Magnificent Seven, although its epic battle scenes and sharp editing continue to inspire directors today.

That wide ranging influence will make this piece a big draw for film buffs, potentially resulting in a significantly increased sale price at auction.